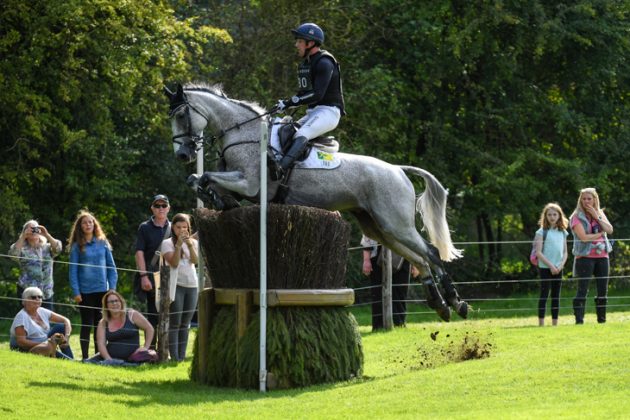 After a dramatic day of cross-country at the Land Rover Burghley Horse Trials, Oliver Townend leads the way on the promising 10-year-old, Ballaghmor Class.

The pair stormed around the cross-country as the last competitors of the day to finish just one second over the optimum time, finishing on 40.6.

“He was very good — I think we lost the one second with him jumping so big over a number of fences,” said Oliver, who last won Burghley in 2009. “I’ve had to prove to myself this week that I was right in thinking he was ready to come here as he’s a young horse — some people said that it wasn’t a good idea — but he’s proved what a good horse he is.

“I went the long route at the Trout Hatchery as I wasn’t sure what he would do at the final element [a triple brush on a curve in the water], but he’s very exciting and he’s different to any horse I’ve sat on in the past five years.

“He’s generally a good showjumper but I’ve seen good jumpers have four down at Burghley on the final day. Whatever happens, he’s done his bit for me today.”

The horse hasn’t always been the easiest though.

“He’s always been very sharp and he’s had us all on the floor at home,” explained Oliver. “He had a girl off going up the gallops just two weeks ago and he’s gone through arena mirrors and out of the school through the fence in the past. But I’ve always liked him and we’ve probably got a stronger relationship as a result.”

Gemma Tattersall was one of just three riders inside the optimum time of 11mins 14secs. She holds second place on Arctic Soul, 2.4 penalties behind Oliver.

Izzy Taylor is in third, completing the British one-two-three, riding Trevidden. The 12-year-old flew round, also making the optimum time and they are on a score of 45.6.

“He’s a super horse that loves to gallop and I love him,” said Izzy, who took on the ride just 12 months ago. “We clicked as a partnership straight away and he’s a horse that makes me get up in the morning.”

Tim Price is in fourth riding Ringwood Sky Boy, while Piggy French is in fifth on the mare, Vanir Kamira.

“She’s fab and I’m a bit emotional,” said Piggy. “She never feels that scopey at one-day events, but she’d die for you to get through the flags and you don’t get many horses like that.”

Andrew Nicholson is sixth on Nereo after clocking up 7.6 time-faults and Tom McEwen recorded a promising result on the 10-year-old Toledo De Kerser to sit in seventh.

“My reactions were too slow and I didn’t get my reins back after the drop in,” explained Michael. “It’s my fault — it was a stupid mistake.”

Andrew Nicholson had a horse fall at the second part of the Storm Doris combination when his first ride, Qwanza tried to go through on one stride instead of two and overnight leader, Mark Todd fell from Leonidas II at Discovery Valley when his horse over-jumped the first part and crumpled on landing.

“I was up on the time but he launched over the first part and then lost his footing,” said Mark. “He’s normally super-reliable cross-country.”

Take a look at what the cross-country course

The final horse inspection takes place tomorrow morning at 9am before the final showjumping phase.