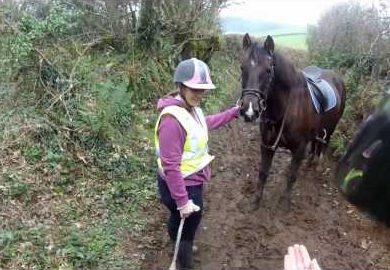 A video of a thoughtful motorbike-rider considerately passing spooked horses has gone viral on social media.

James Higgs was exploring off-road routes in north Devon on his trail bike on 11 March when he saw two horses walking towards him.

James realised the horses were unsure of his bike so turned its engine off and asked the riders how best to help them pass safely.

He even offered the horses a mint to try to reassure them.

“The riders were lovely, as the majority of horse riders are towards motorcyclists,” James told H&H. “We share a common vulnerability on the roads and sadly set out on our respective rides at the mercy of motorists.

“Helping nervous horses feel more comfortable around motorcycles improves safety for both types of rider, though the next motorcyclist encountered by the two horses in my video may find themselves mugged for mints!”

Since James shared the video on Facebook it has had more than a million views.

“I’m pleased my video has been so popular and has been shared by motorcycle clubs, driving instructors and road safety groups, and hope that more people can start to see us as humans rather than ‘horse riders’ or ‘motorcyclists’.

Angel was the fifth horse to be struck

“Being prey animals, horses can be frightened by anything, so it’s important to read their body language, follow the rider’s instructions and pass wide, steadily and slowly only when it is safe to do so.”

James keeps his bikes on a livery yard so he is used to encountering horses.

“I’ve hacked out a few times as a beginner but stopped after I injured my knee in a fall, which hurt a great deal more than any fall I have had whilst riding motorcycles,” he added. “You horse riders really are some tough people.”