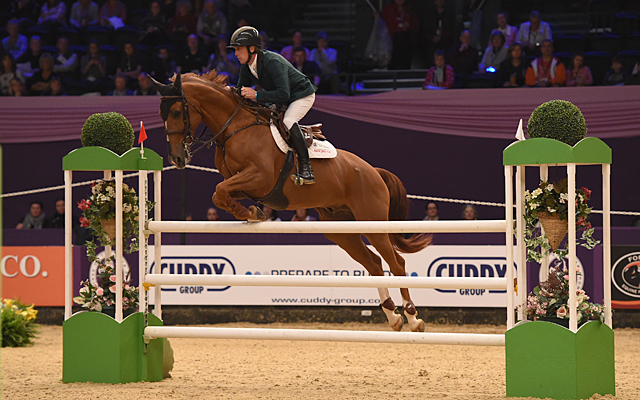 Ireland’s Shane Breen galloped his way to victory in the Zinc Management Speed Horse of the Year class at HOYS.

Riding the 10-year-old Acoustik Solo Du Baloubet, Shane took strides out where he could and every tight turn possible to finish clear in a time of 44.69 seconds.

“I was confident that I could do enough to win the class,” said Shane. “I don’t have to ride this horse fast to be fast — he can turn on a sixpence and I can gallop him down to any fence and know he’ll jump it.”

Shane said that the chestnut had been the bridesmaid this year, clocking up a number of second placings.

“His part-owner, Bina Ford who couldn’t be here today, phoned me this morning and said ‘you’ll win today’ — she’s always slagging me for coming second on him,” laughed Shane who has now won this class four times. “It’s great to win here — I love the show and the atmosphere.”

The runner-up spot went to fellow Irishman Billy Twomey on Ardcolum Duke, the horse that won the accumulator class at HOYS yesterday. The pair, who were drawn second to go in this one round competition, put in a fast clear in a time of 45.09 seconds.

“I knew that my horse went at a similar speed to Billy’s in the accumulator class,” said Shane. “I watched him go before my round today and I worked out I could get one less stride to the double from fence seven — I’m sure that’s where I won the class.”

Shane also said that he wanted to put pressure on Guy Williams who came later in the class on Casper De Muze. “It worked,” said Shane after Guy had the penultimate fence down, thus adding two seconds to the fastest time of the day, 43.24 seconds to finish in third.

Read the full report from HOYS in the next issue of Horse & Hound magazine, out on 13 October.