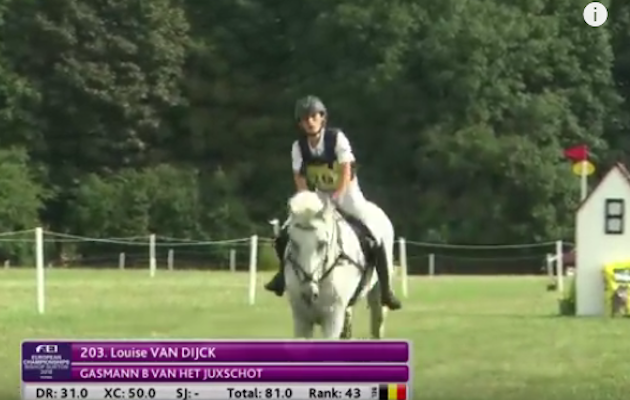 A young eventer gave a remarkable display of cross-country riding after her stirrup leather snapped on her championship debut.

Belgium’s Louise Van Dijck was lying in 10th place after dressage with Gasmann B VH Juxscot at the FEI European Championships for ponies, held at Bishop Burton (7 to 11 August).

In a ride reminiscent of Mark Todd’s incredible one-stirrup Badminton round aboard Bertie Blunt in 1995, Louise carried on to jump clear around the championship track.

The rider showed her skill and core strength, keeping balanced through the Jonathan Clissold-designed course.

She was welcomed home by a cheering support team as she crossed the finish line, who then helped her dismount while she caught her breath.

“I have no idea [how I did it],” Louise told Lizzie Greenwood-Hughes in her livestreamed post-round interview.

“I lost my stirrup at fence three and I just sat in my saddle and kept going for the team.

“I was scared because the water was coming up and that was a difficult combination.

“He is a good pony and always jumps, he never stops if it isn’t necessary — I did it for the team, we have the best team.”

We’ve dug into the archives to remember one of Mark Todd’s hairier Badminton cross-country rounds...

The pair added 50 time penalties to their dressage score of 31 — finding a new stirrup and leather for the showjumping the following day — and helped the Belgian team to sixth place.

Team gold was won by the Brits, with team members Saffie Osborne and Little Indian Feather taking the individual title.

For a full report from the championships, don’t miss this week’s issue of Horse & Hound — out Thursday, 16 August