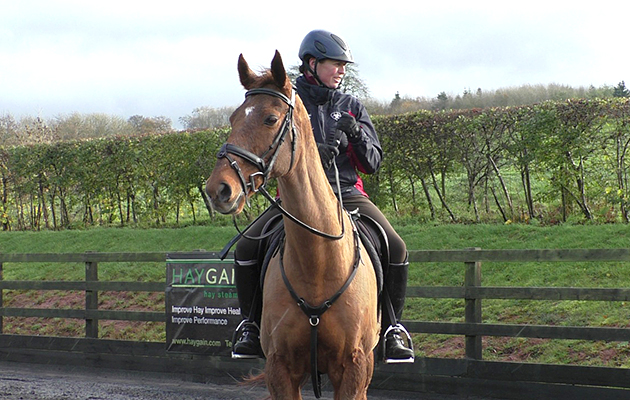 Jeanette Brakewell’s seasoned campaigner Over To You has delighted fans on a yard visit.

The 27-year-old retired eventer was put through his paces by Jeanette in front of a crowd on a Harry Hall Yard Visit last week (15 November).

The multiple Olympic medal-winning horse showed he had not forgotten his job, as he showed off some flying-changes before patiently posing for photos.

“He can be a little stiff behind these days, but actually he felt better today than he did last time I rode him,” said Jeanette.

“He is worked every other day, either lunging, hacking or schooling, and we turn him out for three or four hours every day unless it’s soaking.”

He was retired from competition in 2008.

“He’s given horse and pony nuts, soya oil and a gut balancer and that’s it,” added Jeanette.

“But he’ll do anything for polos and though he can be a bit of a Victor Meldrew sometimes, he loved having a big fuss of him made at the weekend.”

During his career, Over To You collected 2170 British Eventing points and won Olympic team silver at Sydney in 2000 and Athens in 2004.

He has numerous top 10 finishes at three- and four-star level, including taking third place at Badminton in 2003 and fourth in 2006 — both times finishing on his dressage score.

Jeanette and Over To You won three team gold medals at European Championships (2001, 2003 and 2005) and also picked up individual silver and team bronze at the 2002 World Equestrian Games in Jerez.

“We were very honoured to meet the wonderful Over To You looking amazing at 27,” said visitor Debra Kay.

She added that she “loved seeing behind the scenes” at Jeanette’s Staffordshire yard.

The trip was one of a nationwide programme of free trips to top riders’ yards run by the clothing company.