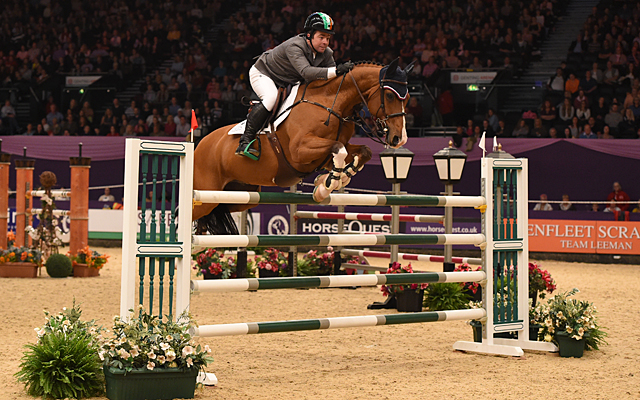 Irishman Cian O’Connor snatched victory in the Showjumper of the Year class at HOYS today (9 October).

Riding Chansonette Farm LLC and Ronnoco Jump Ltd’s Super Sox, Cian put in a blistering double clear round to stop the clock at 32.49 seconds in the jump-off.

“I’m delighted — this is a prestigious show to win at and there’s always a good bit of rivalry between the British and Irish riders,” said Cian.

“It sounds silly but I went for a walk on my own this morning and I was thinking back to the last time I was here two years ago. I had to leave after the second day of competition as my mum sadly passed away, so this win is dedicated to her,” explained a tearful Cian.

This marked the first time Cian has competed Super Sox, a former consistent campaigner for him, since Olympia last December as he is now competed by his owner, the 20-year-old Lillie Keenan who rides for the USA.

“Sox is extraordinary and this was a bit of a catch ride for me which just goes to show how good he is,” said Cian. “Lille jumped clear for the States only a few weeks ago at the Nations Cup final in Barcelona, but she is now busy at college at Harvard until January, so I hope to take him back to Olympia again.”

Cian beat his nearest rival, John Whitaker by 0.04 of a second, finishing in a time of 32.49 seconds.

“I was a bit lucky to the last as I went on six strides instead of seven,” explained Cian.

“Of course I always want to win, especially when my horse jumped so well,” said John. “The atmosphere here gives you the confidence to fight for it. I was a bit slow to the last — she landed in a bit of a heap from the second last so couldn’t get the six strides — or maybe I’m just getting old,” he quipped.

From 32 starters there were seven clears in the first round around the Kelvin Bywater track.

British rider Robert Bevis was third riding Courtney Z with a clear in a time of 33.49 seconds.

To read the full report from HOYS, don’t miss the next issue of Horse & Hound, out on 13 October.