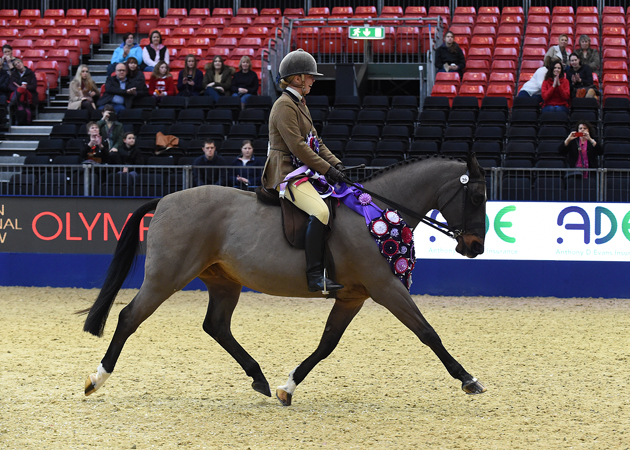 Emily Proud couldn’t believe it when she took the Anthony Evans Senior Showing & Dressage Ltd home produced supreme ridden grand final at Olympia, the London International Horse Show this morning (18 December 2015) with the oldest horse in the class, Alphaville of Oak VII. “This is so special,” Emily says.

“Alfie”, who is an impressive 26-years-old is owned by Emily’s parents Christopher and Rachael.

“Mum and dad bought Alfie as their first horse when he was six-months-old,” says Emily. “He’s a pink papered Hanoverian and so we expected him to grow enough to be suitable for my 6ft2in dad to ride. Thankfully he didn’t grow and so mum and I are able to ride him!”

Alfie was gelded when he was 13-years-old, but his progeny prior to that include a two-star eventer and an established dressage horse.

“He was retired for 12 years,” says 20-year-old Emily who is studying physiotherapy at the University of West England. “Mum bought me mountain and moorland ponies throughout my childhood in the hope that we would one day qualify for Olympia, but it never happened. Little did we know that we had a future Olympia-winning horse sat in the field at home!” laughs Emily, who says she finally “dragged” Alfie in from the field and out of retirement in 2014.

The young rider, whose primary equestrian sport is eventing, says that Alfie has come out better than ever this year. “He’s really sparkled this season,” she explains. “He’s scared of his own shadow at home, but he loves competing and showing off!”

Emily says that Alife isn’t difficult to manage in his twilight years. “He gets worked for a maximum of 30 minutes per day and goes out in the field. That seems to keep him moving and supple,” the rider from Somerset explains.

Emily says that next year they will aim to take Alfie to their favourite shows, including the Three Counties Show where they qualified for this championship. “Alfie doesn’t have anything else to prove,” she says.

The reserve champion was Felicity Vaughan riding last year’s ridden champion What A Spark, who at 21-years-old still looked on top form.

The senior showing championship caters solely for horses and ponies that are 15-years-old or over. They must be home produced, but can be any breed or type.

The in-hand championship went to an emotional Christina Brooks with 16-year-old Guards Jester.

“This is the ultimate dream,” Christina says. “I’ve never competed here before and until three months ago, “Pookie” and I had never even tried in-hand showing!” says the Fell showing specialist from Thame in Oxfordshire, who qualified for this championship at Brook Farm Training Centre in September. “I was so scared going into the arena, but he really tried his best for me,” she continues.

This was even more of a fairytale ending for Christina and her fell pony as he has recovered from cancer.

“Two years ago Pookie had to be operated on to have a cancerous tumour removed from his sheath,” explains Christina. “I nursed him back to health and I just can’t believe what he’s achieved,” she says.

Pookie was a successful stallion until he was 10-years-old and has 27 progeny on the ground.

“I recently got in touch with his breeder Mrs Dixon and she couldn’t believe he had qualified for Olympia,” explains Christina, who keeps in touch with most of the owners of Pookie’s offspring via Facebook.

“I’m going to sleep in my sash tonight — I don’t want the dream to end!” smiles Victoria.

The oldest competitor in the in-hand championship was 30-year-old Wylie, exhibited by Donnah Taylor who finished in fifth place.