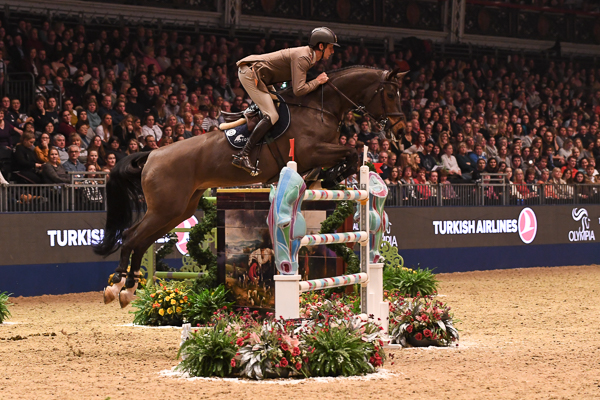 Alberto Zorzi made history when winning the Turkish Airlines Olympia grand prix tonight (19 December), becoming the first Italian to ever take top honours in this class.

Riding the 13-year-old mare Contanga, Alberto had his foot flat to the boards to finish clear in 34.05secs.

“I knew I needed to go faster in the turns as there weren’t many other places where you could make up time,” explained Alberto. “I had a very good distance to the last fence which meant I could keep travelling to it.”

Alberto has had the ride full-time on Contanga, owned by Athina Onassis de Miranda and Victory Equestrian Sport, since July and this marked not only his first win at his first ever visit to Olympia, but also his first win on this mare.

“I wasn’t expecting to win, but after I went clear in the first round, I said I wanted to give it a try,” said Alberto. “I’ve always wanted to win at Olympia and now I can sleep knowing I’ve managed it.”

Based at Stal Tops — the Dutch home of the founder and president of the Longines Global Champions Tour, Jan Tops — since 2015, this win tops off what has been a great year for 28-year-old Alberto, which has also seen him finish fourth individually at the European Championships and as the winner of the LGCT grand prix of Monaco.

Second went to Harrie Smoulders of the Netherlands, riding Zinius. The pair were quick, but a stumble after the wall, the second fence in the jump-off, Harrie had his work cut out. He eventually fell just 0.19sec adrift of Alberto’s time.

“My horse is fast and I knew I had a chance, but that stumble cost me victory,” said a disappointed Harrie, who was the 2017 LGCT series champion. “I had to rebalance and that cost me time.”

Best of the Brits was Michael Whitaker, who finished third on Jb’s Hot Stuff. Fourth to go in the jump-off, Michael posted the first double clear in 34.3sec.

“It was close and after my round I didn’t think I had quite done enough to win, but I was hopeful,” admitted Michael. “The mare is on great form and jumped really well, but I could have done with a flyer to the last.”

The 11-year-old, who Michael has had the ride on for the past two years owned by her breeder, Jayne Bean, is by Locarno 62 who was campaigned by Michael’s niece, Ellen.

“I went as fast as I could and probably could have done with a better draw in an ideal world as I had nothing to beat when I went in,” explained Michael. “But this mare is getting better and better.”

Twelve combinations made it through to the jump-off from 32 first round starters around the track built by Guilherm Jorje, which resulted in five double clears.

“The course have been great all week, and this particular one was very fair,” said Michael. “There weren’t many options in the jump-off, and everyone needed to take the same route with a similar number of strides, but it was the same for all the competitors.”

The next best-placed Brit was Ben Maher, riding Winning Good, who is just an eight-year-old stallion. Guy Williams, third to go in the first round and who duly posted the first clear, was 12th on Rouge de Ravel.