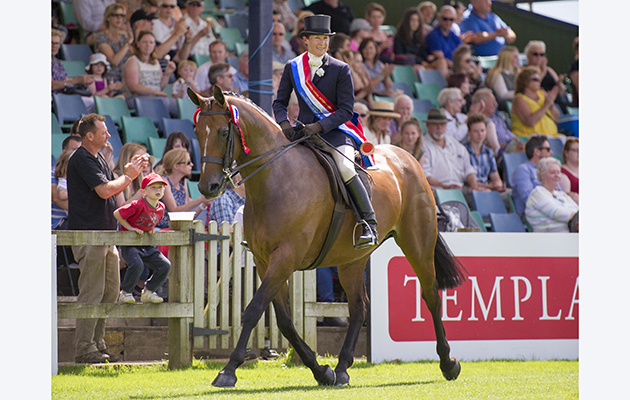 “It’s quite nice that the two oldies got it together and were first and second,” said Jayne, who suffered a head injury while riding in the ring at Keysoe in February.

“You never feel pain when you’re having a good time and my aches and pains have just about gone — the summer sun has helped.”

Allister Hood was left with a split liver and broken ribs after a fall, also in February. He was travelling around in a mobility scooter at Hickstead, but rode in the ring as elegantly as ever, qualifying two champions for the supreme.

His son Oliver was drafted in to partner Annabel Jenks’ riding horse Diamonds Are Forever and they finished third on a mark of 21.

“Blue was the first horse I rode [after his accident],” said Allister. “He’s just so genuine; a super cob.”

The supreme was a drawn order for the first time this year. Our Cashel Blue was third to do his individual show and earned 26 — a 10, nine and seven from judges Jane McHugh, Di Lampard and David Walters respectively.

“Normally I don’t feel pressure but today I did,” admitted Jayne. “Going last and seeing everyone else go, I thought ‘right, we’ve got to get it right now’. The lovely thing about Betty is she’s so reliable.

“Knowing that she can really gallop, I had to focus on that as the centre of my show. She also walks well and relaxes well afterwards, so I gave her a long rein and then she stood quietly at the end.”

There was more reason for Jayne Ross and Carol Bardo’s team to celebrate when Olivia Bowen and Golden Tassett (above) were crowned the clear winners of the Underwood supreme ridden pony championship.

Olivia has been based at Jayne’s Berkshire yard for several stints this season, but Jayne confirmed that Olivia didn’t need any last-minute advice before going into the championship — her individual show was already “spot on”.