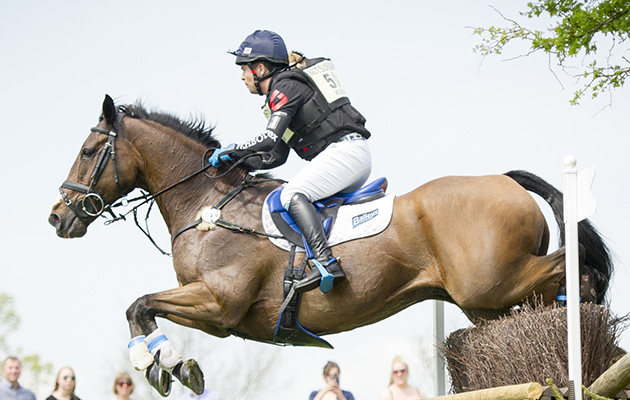 Mulry’s Error has completed his final four-star in front of a cheering crowd at the Mitsubishi Motors Badminton Horse Trials.

Rider Ben Hobday paid tribute to Sallie Ryle’s part-bred Clydesdale, who will enjoy a fun-filled retirement as a schoolmaster and hunting.

Ben told H&H after the cross-country on Saturday that this would be the last CCI4* for the popular “V8 Supercob”.

The pair completed the showjumping phase earlier today (Sunday 6 May) to take their tally of four-star finishes to four — three Badmintons and one Burghley.

They have also completed numerous three-stars together, including Bramham, Blenheim, Tattersalls and Chatsworth.

“However, he felt so good out hunting that we thought we would give it one more go and I’m really glad we did because we’ve had a great time.”

Ben added the completion “means a lot to all of us”.

“You have to remember that he is a cob — he’s a Clydesdale cross and when I started riding him for Sally it was a bit of fun,” said Ben.

“I used to help her out and help train her, we never dreamt of this. He isn’t winning, but he has won to us because he kept going and he came home when other good horses haven’t.

“We have to be really grateful for him for keeping trying — he loves the job, he really does, and he will take it easy now.

“He will do some smaller shows with some of our stable jockeys and misbehave for them now.”

Mulry “loves hunting” and will enjoy following hounds again next season with the Tynedale.

“He is quite the celeb on the hunting field — he makes me very brave out hunting anyway!” laughed Ben.

“He loves jumping hedges and gates all day long, so he will have a very nice retiement from the big time.”