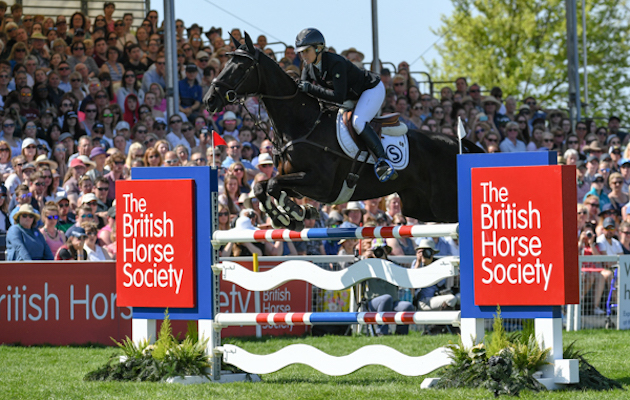 The British-bred mare, by Classic, rattled several fences, but all the poles stayed firmly in their cups and the pair finished clear more than four seconds inside the tight optimum time.

“I had Lady Luck on my side,” beamed Jonelle. “She is a deserving winner despite the luck today.

“It was so tight, I really thought anyone in the top-10 could have won it.

“I’m just so pleased with her and for her owner, Tricia Rickards.

“We haven’t ever jumped a clear round on the last day, but sometimes dreams do come true and you have to believe it is possible.

“At 15 years old it just feels like she is getting better and better. Each day we have pulled off what I hoped we would be able to achieve.”

Jonelle, 37, is the first female winner in 11 years and returned to eventing last autumn after a six-month break from the international circuit to have a baby.

The Kiwi rider added it is “special” to join the four-star winners’ club at Badminton of all the CCI4*s in the world.

“Last night I told myself it was going to take a clear round to win, there’s some very good horses behind me,” added Jonelle, who rose 21 places after dressage.

“Classic Moet is a good jumper, she tries, but is a bit unorthodox in her style, it doesn’t come easy to her — just like everything else she does, she tries her heart out.”

While Jonelle was on the same score as Oliver Townend and Ballaghmor Class ahead of the final phase (28 penalties), she was closer to the optimum time, which gave her the lead.

Two rolled poles for Oliver and Ballaghmor Class dropped them to fifth.

This gave Jonelle a pole in hand over Oliver and his other ride — Angela Hislop’s Cooley SRS, who finished second — which she did not need.

“Congratulations to Jonelle on an unbelievable performance,” said Oliver.

“I have never seen nor do I think we will ever see a cross-country galloper like that again — I couldn’t keep up with her in the prize-giving!

Ros Canter and Allstar B tipped one rail in an otherwise foot-perfect round to finish third.

“I’m someone who can be quite a doubter and I get quite nervous,” said Ros. “Each day I have tried to take it as it comes and to treat it like it is something I do every day.”

Ros added she thinks there is “more to come” from the horse, who she co-owns with Caroline Moore.

Kelvin Bywater’s showjumping course proved to be very influential. Only nine combinations jumped clear and of those, just five finished without time faults to add nothing to their score after the first two phases.

Faults were fairly evenly spread across the track, however the water tray at fence 11 claimed its fair share of scalps, including Michael Jung and La Biosthetique-Sam FBW (10th)  and Mark Todd on Kiltubrid Rhapsody (sixth).