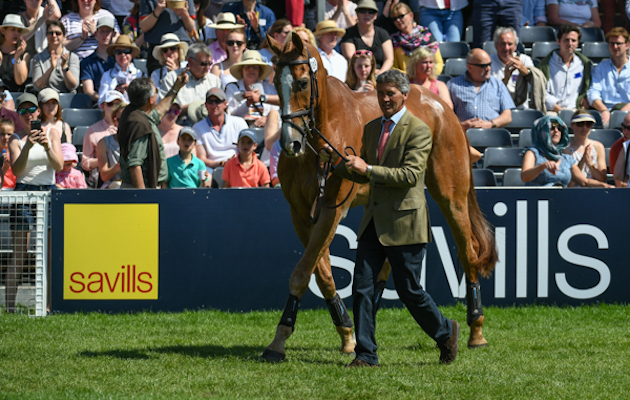 Deborah Sellar’s 18-year-old gelding, who won here last year, has been competing at three-star and above for the past decade.

“It seemed a good place to retire him,” said Andrew.

“Things didn’t quite work out how I wanted them to, but the show he put on yesterday was superb and hopefully that’s what people will remember him for.”

The combination had been lying in 12th place overnight and were sent to the holding box at the final veterinary inspection on Sunday morning.

Andrew made the decision to withdraw Nereo from the holding box and the horse was officially retired to a standing ovation from the packed stands ahead of the top-20 showjumping rounds.

“In my mind I was always retiring him this weekend,” added Andrew.

“The vet in the holding box wanted me to re-present him, he looked good on the grass but on the hard he wasn’t sound.

“He lost a shoe yesterday, he is getting old and the bones in his feet aren’t as tough as they used to be.

“With what happened at the trot-up, it seemed a good plan when they asked me if I wanted to take him in after the parade — that seemed perfect.”

Nereo (Horse Hero) at Westwood Stud in the Village of Lockeridge near Marlborough in Wiltshire, UK on 16th May 2016

Andrew said winning here in 2017 was the “highlight” of Nereo’s career.

“I’ve done it all with him — by performing year after year at this level and at the top, not just making up the numbers, he showed unbelievable toughness.”

Nereo has won five out of his 40 international starts and been placed in the top-10 in 25 others.

Andrew added Nereo will enjoy an active retirement with the rider’s daughter Lily taking over the reins.