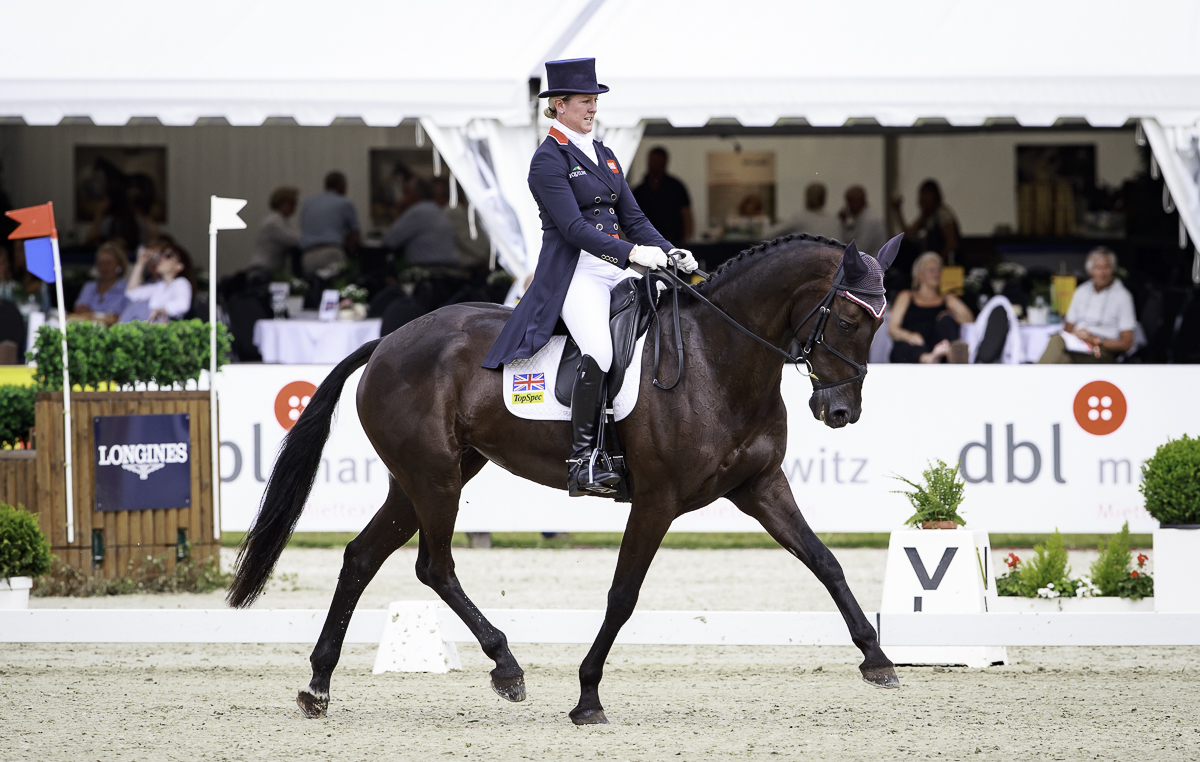 Nicola Wilson leads a strong British charge in the CCI4* at Luhmühlen, Germany, presented by DHL. The Yorkshire rider holds second after the first day of dressage with James and Jo Lambert’s 11-year-old mare Bulana.

“She’s so lovely — she’s always been a feisty horse, but it’s only because she wants to get on with the job,” said Nicola. “She was so rideable in there today. It’s unfortunate her owners James and Jo can’t be here, but hopefully they’ll be as excited as we are.”

Nicola and the 2015 Boekelo winner scored a good smattering of marks of eight and above, including a nine for their entry from Nick Burton at E. Their final score was 38.7.

Nicola Wilson and Bulana in the dressage at Luhmühlen 2017. Picture by Libby Law Photography

The top spot is held by US rider Marilyn Little, who was the last competitor in today with another mare, the 12-year-old RF Scandalous, and scored 38.

“She was wonderful — she’s always so much fun to ride,” said Marilyn. “She’s the fittest she’s ever been and so was fresher than normal. It was an electric atmosphere and I needed to trust her more.”

“He’s obviously not built for it, but I just kept thinking, ‘Keep your hands up and keep pretending’ as he’s sexy-looking even if he doesn’t love it,” said Oliver.

Ros Canter completes a trio of British riders in the top four, holding fourth on her own Zenshera. Her test, which scored 45.1, was only marred by the horse doing an unscheduled flying change during the extended canter.

“Me and ‘Alfie’ have grown up together and I’m used to his keenness to get on with the job in there — I purposefully hadn’t even practised those changes at the end of the diagonals,” she said.

Temperatures at Luhmühlen were in the high 20s today and some horses had clearly been hastily clipped to help them cope with the heat.

The dressage continues tomorrow at 1.30pm local time (12.30pm in Britain), with Harry Meade (Away Cruising) and Pippa Funnell (Billy The Biz) among the British competitors.

Check back for regular updates from Luhmühlen all week, plus full report in H&H next week, out Thursday, 22 June.
0 Videos