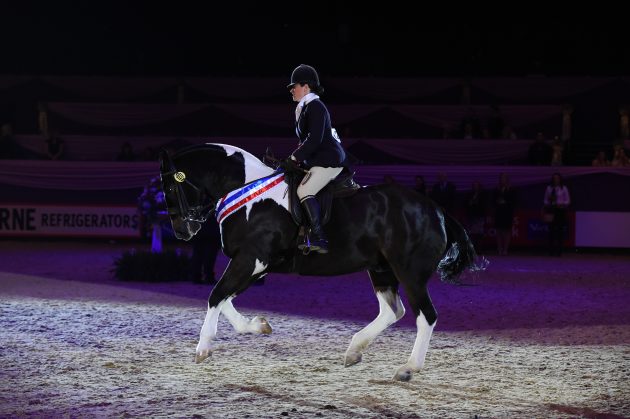 Vicky Smith was triumphant in the CHAPS (UK) coloured horse and pony of the year championship at HOYS today (9 October) riding The Life Of Riley.

A delighted Vicky said: “I’ve been trying to win here for 25 years. I remember my first HOYS at Wembley when I was 12-years-old.”

After she was second at HOYS five years in a row, Vicky decided to take a break from the showing scene and turned her hand to eventing instead.

“I said to my mum that it was too hard to win at HOYS so let’s have a go at eventing instead,” explained Vicky, who was 12th in the BE100 Badminton grassroots championships (now known as the Mitsubishi Cup) in 2015.

Vicky gained the ride on ‘Riley’ last year when his owner asked her for a bit of help.

“Hayley bought him as a three-year-old from Ireland and she produces him at home. He’s so well-mannered, genuine and very special,” said Vicky who is a P.E teacher at a secondary school in Stockport. “Riley qualified for HOYS on his first attempt at the CHAPS (UK) Northern Regional Show in May and since then he’s just been hacking at home.”

Vicky said it was “a dream come true” to win at HOYS. “Riley has about 100 fans here and I had to remember to keep my heels down as we gave them a wave as we trotted out of the arena under the spotlight.

“When I saw the ride he was giving the judge, I thought that if he didn’t win today, he never will as it was exceptional.”

Read the full report from HOYS in next week’s issue of Horse & Hound magazine, out 13 October.