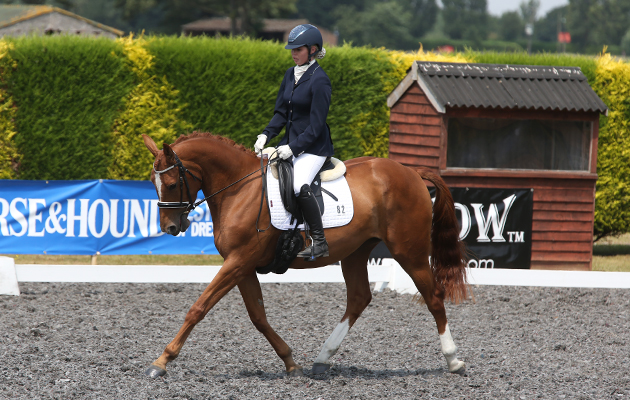 Lauren Spradbury has taken a decisive lead in the Horse & Hound Festival of Dressage Intro Championship.

Lauren and the four-year-old mare Wild Rose scored 71.2% to win the first of their two championship tests.

Jade Churchman and Frenchfort Prince are in second on 67.72%, with Lilly Wright and Nipper in third on the same mark, but with lower collectives.

While Lauren has the clear lead, less than 4% separates second to 10th places.

The homebred mare (Sammy G Jo x Romantico Di Villagana) was backed in January and makes her competition debut at the H&H Festival of Dressage.

“She has taken everything in her stride,” said Lauren, from Black Cat Equestrian Centre at Sutton-on-Sea. “She’s really laid back.”

Lauren, who has three rides at the festival this weekend, added that the mare is “really easy” to train.

“I was really pleased with her whole test, she felt really confident and didn’t look at any of the banners, which was good, as this is only her first show” she said, adding the mare will soon be for sale.

The pair are also among the leaders in the prelim championship, finishing third on a score of 71.98%.

Pat Clayton and Budsson took the prelim championship class win, with the highest score of the day (72.16%).

In second is novice winners Sarah Clarke and Hiawatha La Perle on 72.07%.