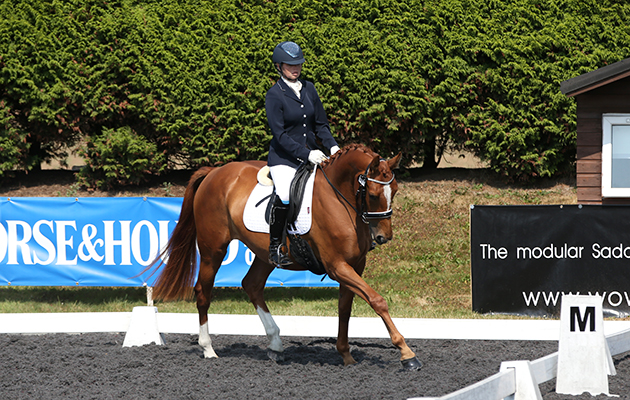 The Lincolnshire-based rider, who hails from Black Cat Equestrian Centre at Sutton on Sea, won both the intro and prelim championship titles with her four-year-old homebred Wild Rose, known as “Ginger” to her friends.

A former showjumper, Lauren took up dressage about three years ago and was full of praise for her winning chestnut mare.

“Ginger has taken to dressage so easily,” said the mother-of-two.

“I’m over the moon, I couldn’t have asked for any more from her.

“She gave it 100% and absolutely tried her heart out. This is her first big show, she’s been to one tiny little show before, but nothing of this scale and she’s done absolutely fantastically.

“She’s taken everything in her stride, from the stables, to seeing all the banners, she’s just been amazing.”

Lauren credited her win to her parents.

“I owe it all to my mum and dad, Maria and Paul Spradbury,” she said, also thanking her trainer, Sheepgate’s Sarah Payne for her support.

The pair bagged four plus-70% marks across the two championships, with a top score of 75.43% in their second intro championship test.

‘I had three comments that said ‘needs more ground cover’, so that’s what I need to work on tomorrow’

Meanwhile the prelim music winners Kirstie Clarke and CDS Calzini were a close second in the prelim championship, scoring 71.12% on day one, followed by 71.56% in their second test.

In third was Sarah Clarke and Hiawatha La Perle.