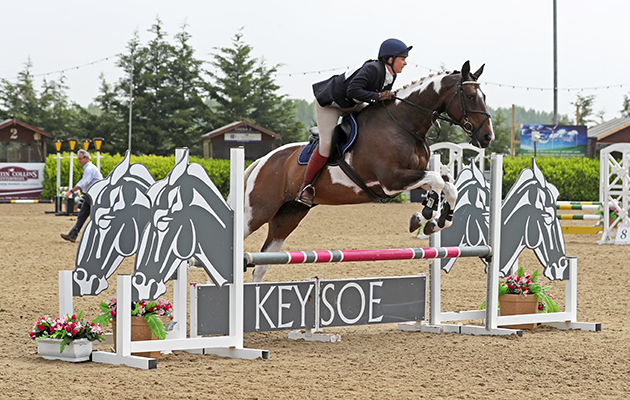 Beccy Belcher was in total disbelief upon winning the 80cm championship of the H&H Festival of Eventing, run in association with KBIS.

Riding Sarah Rooke’s coloured mare, Sugar IV, Beccy rose from sixth after dressage. The pair then enjoyed a clear cross-country round within the optimum time to sit in second place coming into the final showjumping phase, where they proceeded to leave all of the poles in their cups. This was good enough to secure the win when overnight leaders Debbi Cox and Molly incurred eight faults.

“To win is completely unexpected,” said an elated Beccy. “I’ve only had ‘Spice’ for a year and this is our second horse trials together and until today we had only jumped one round of showjumping too.”

Beccy was given Spice by Sarah to use as a broodmare.

“Spice has already had four foals and then was chucked in a field,” explained Beccy, who works as a lecturer and is head of business, travel and tourism at Berkshire College of Agriculture. “My history is in showing and dressage and so I fancied giving eventing a go. Spice looked like she was bored and so we brought her into work and haven’t looked back.”

Beccy admitted she left entering the festival until the very last minute.

“I hadn’t actually even taken Spice cross-country schooling when I entered,” she explained. “I entered on a whim and thought we could use the experience as a schooling exercise.”

The pair looked thoroughly convincing throughout the event and stormed around the cross-country.

“Spice is like a Ferrari and is always 400 steps ahead of me,” said Beccy. “But she was a dream across country — when her owner saw we were well-placed after the dressage, she text me saying ‘make sure you let the handbrake off on the cross-country and she will look after you’. I’m glad she said that, else I might have gone a bit steadier.”

Chloe Nixon, who led the dressage, finished in eventual second riding her Lipizzaner mare, Anna thanks to a clear showjumping round. They added four cross-country time-faults to a 28 dressage. Craig Messenger and Findon Euphoria completed on their dressage score of 33 to finish third.