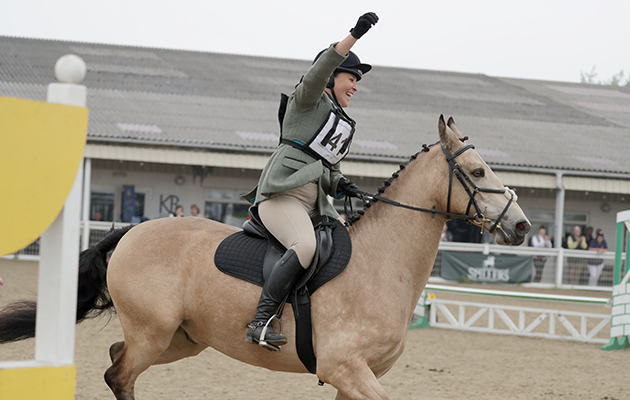 Louise Bergicourt-Toolan didn’t let the pressure get to her on the final day of the H&H Festival of Eventing, in association with KBIS. She jumped a clear round in the final showjumping phase of the 70cm class to maintain pole position.

“I just can’t believe it — for us to finish so close to our dressage score is a great achievement, especially as this is our first eventing competition together,” said Louise who helps run a riding school in Richmond, West London.

Louise was riding Melanie Gatt’s six-year-old Connemara x thoroughbred, Woodfield Gold. The dun completed on a score of 28.25, some 3.1 penalties ahead of second-placed 11-year-old Frankie Fox and Rockwood Dundoolie.

Woodfield Gold (or ‘Phoenix’ as he is known at home), arrived from Ireland onto Louise’s riding school two years ago, and was used as a horse to teach novice riders until recently.

“He is a one in a million horse and he gave me a brilliant round today,” said Louise, a mother of one. “He was looking at each fence, concentrating and didn’t let the atmosphere get to him. I was nervous this morning, but only because I didn’t want to let him down. I just shut the crowds and atmosphere out and imagined I was schooling at home.”

Louise is excited about the future for this 15.2hh dun.

“I think it’s onwards and upwards for us now,” she said. “We will hopefully look to aim him at qualifying for the Mitsubishi Cup at Badminton.”

Last year’s winner, Sally Pidsley and Tranwheal Tineth Moon, added four faults to their score in the showjumping but held onto third place.