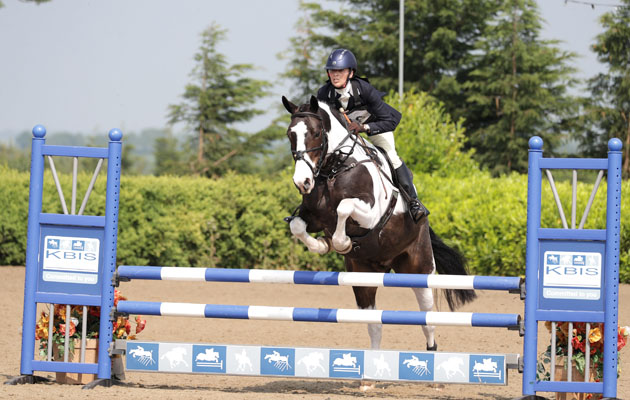 On Friday afternoon, Sarah Nicholls and the seven-year-old 15.1hh CSH Sioux sat in seventh place after the dressage phase of the H&H Festival of Eventing, run in association with KBIS. But thanks to a great clear cross-country round inside the optimum time, followed by one of few clear showjumping rounds, the pair found themselves in first place at the end of the competition.

“I can’t believe we’ve won,” said a delighted Sarah, who hails from near Leicester and works for an engineering company in Rutland. “I knew ‘Simon’ was capable as he can do a good dressage test and is reliable across country, but showjumping is my weakest phase. I was hopeful but I tried not to let my emotions get in the way of how we performed.”

Sarah was competing in her first three-day event aboard the coloured horse, who is by a Grade A showjumper, out of a gypsy cob mare. She bought him as a just-broken four-year-old “for little money” as a project to sell.

“But he just kept getting better and better, so I’ve kept him,” explained Sarah, who also crosses the biggest of Quorn Hunt country with this diminutive gelding. “I couldn’t fault Simon this week — I do this purely to have fun and I couldn’t do it without the support of my parents who have been holding the fort with my other two horses at home this week.”

Hannah Parr and Tinkers Boy also rose up the placings thanks to a clear showjumping round, moving up from fourth to eventual second. While overnight cross-country leader, Honor Gordon and Made Of Gold dropped to third after incurring four faults. Just 13 riders from the 48 that came forward to the showjumping jumped clear, making this a very influential phase. Clare Cottingham and Easy Peasy II enjoyed the biggest rise in placings thanks to a clear jumping round — she rose from 33rd after the cross-country to eventual 16th.