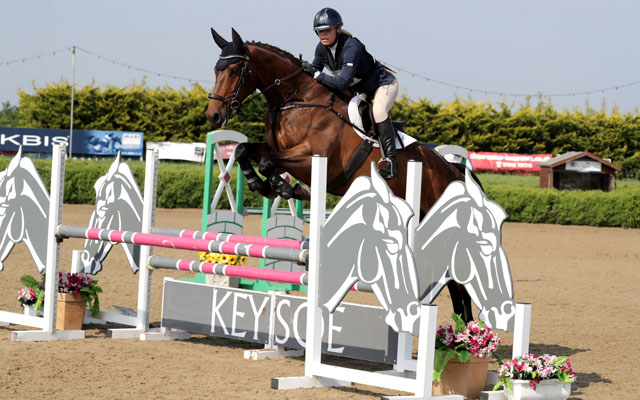 The leaderboard of the 100cm championship at the Horse & Hound Festival of Eventing, run in association with KBIS, had a huge shake up on the final day today (28 May).

Eventual winners, Julia Dungworth and the eight-year-old Gortmore Ballyneety, enjoyed a meteoric rise thanks to a clear showjumping round, climbing from eighth after the cross-country to take first prize.

“This event has done ‘Gala’ the world of good and it has been a brilliant experience for him,” said Julia of her Irish-bred gelding. “I can’t recommend this competition enough to other riders.”

Julia has owned Gala for just under a year after one of her teaching clients brought him for a lesson.

“He bucked his old owner off in the lesson and I said ‘I like that horse’,” admitted Julia, who finished on her dressage score of 33.25. “He’s really sharp — he’s not spooky at fences, but if someone took their jumper off by the side of the arena, he would bugger off with me! I couldn’t let the rosette be pinned on his bridle today as I would have gone through the hedge.

“Gala is a diamond in the rough and I have high hopes for him for the future — he will get it but just needs this sort of competition to help give him some grounding.”

Second place went to Emma Freeman and Quick Dolla Bill, who also flew up the placings from ninth thanks to a clear showjumping round. While another to benefit from a clear round on the final day was Helen Fraser and Justanumber, who rose from 10th to third. Overnight cross-country leaders Doriel Watson and Claude II dropped out of the top 10 after an expensive showjumping round.