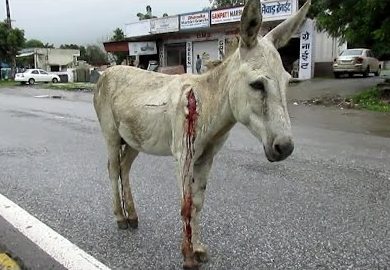 A donkey found seriously wounded on a busy road in India has been rescued by a welfare group.

The donkey, named Hobnob, was standing in the carriageway in Udaipur, Rajasthan, with a bleeding cut to his shoulder.

A vehicle had hit him and caused the injury, but Hobnob was too weak to walk away from the road.

“We got a call to rescue a donkey bleeding on a busy highway,” said an Animal Aid Unlimited spokesman.

“Blood dripped all the way down his leg. A deep four-inch wedge of flesh and muscle hung from his shoulder and he stood motionless, stranded between speeding trucks and cars and a median (traffic barrier) he was too injured to climb over.”

Hobnob was lifted into a lorry by two rescuers and taken to an Animal Aid sanctuary for treatment.

“Rescuing this darling was easy, because he didn’t even resist being carried into our ambulance,” said the spokesman.

“Hobnob was a dream patient who, through 54 sometimes painful wound dressings, had a story to tell that we find waiting among so many: the story of gentle innocence and the beautiful contentment that should belong to each animal on earth.”

Hobnob has now recovered from the ordeal and is enjoying life with other donkeys and Animal Aid workers at the sanctuary.

Earlier this year (28 September) horseandhound.co.uk reported Animal Aid Unlimited’s rescue of a donkey who had been attacked by wild animals.

The filly, since named Genevieve, was found beside her mother with more than a dozen bite wounds.

Workers from Animal Aid Unlimited came to the youngster’s aid, taking her to their sanctuary for treatment alongside her mother.

Thanks to daily care, Genevieve has made a full recovery.

“Little Genevieve survived and thrived because of daily wound dressings and the incredible love her mother gave her every step of the way,” said the spokesman.

He added that without the charity’s intervention Genevieve could have died.

“Without emergency rescue, this almost surely would have ended in tragedy,” he said.