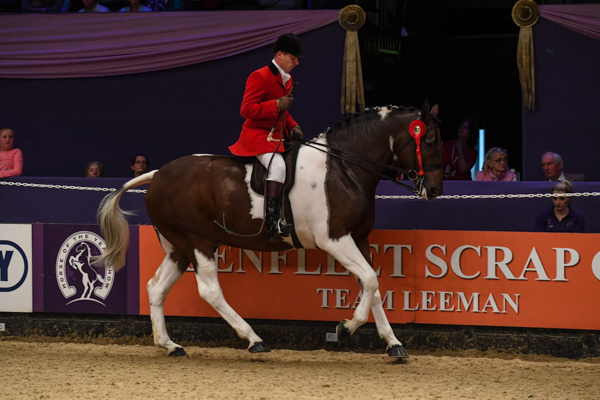 The 2017 CHAPS (UK) coloured horse and pony of the year championship at HOYS (Horse of the Year Show) went to Doorleys Prince today (8 October).

Ridden by prolific producer Simon Charlesworth, this marked just the fourth ever ridden show for the five-year-old.

“It’s just magic,” said Simon. “He was a bit tense and wondered where his friends were, but he’s got such a good brain that he learns from it and then gets on with the job.”

Doorleys Prince was unbeaten during his in-hand showing career, but disaster struck just as he had started his ridden campaign in April 2016.

“He was kicked by another of his owner’s horses in the field and ended up with a cracked elbow,” explained Simon. “He came back into work last August, so I suppose work-wise he’s still only a four-year-old.”

The Irish Sports Horse qualified for HOYs at the Royal Bath and West Show, where he was also champion and he was victorious at the Coloured Spring Show too.

“He has the best brain and would bust a gut for you — he makes showing worthwhile,” confessed Simon, who has had this horse since he was a three-year-old.

Martin Wood, who owns Doorleys Prince, bought him as a colt from Ireland and Simon thinks there is plenty more to come.

“He’s still babyish in some ways and we’ll just aim to do our best in the supreme championship this evening,” he said.

The reserve title went to Login Lucky Lad, a piebald native stallion, who is also owned by Martin Wood and was ridden by Michaela Wood.