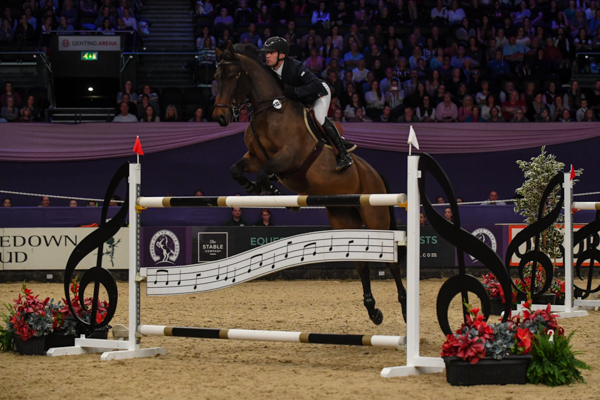 Nigel Coupe continues what has been an amazing year at HOYS (Horse of the Year Show), where he has become the Leading Showjumper of the Year.

The 46-year-old jumped one of seven clears in the first round before posting a blistering clear jump-off round in a time of 38 seconds. He was riding his 2017 Hickstead Derby winner, Golvers Hill, who has also competed at HOYS in the working hunter class in previous years with his owner, Susan Simmons.

“It’s amazing every time you win here,” said Nigel. “I first competed at HOYS in pony showjumping in 1986 and then won the leading pony title in 1987 — it still means a lot.

“Golvers Hill is a top, top horse with a heart of gold,” he said of the 14-year-old by Ricardo Z. “I have to pinch myself — it’s been such a year.”

Five riders jumped clear in the jump-off and one of those was John Whitaker and Argento, who went in just before Nigel. They completed what looked like it might be an unbeatable fast, clear round in a time of 38.88secs.

“John is a good mate, but I knew I just had to try and beat whoever was in front of me,” explained Nigel. “I had to go in there and give it a good go and I think I won it with my turn back from the double to the upright — I saw my stride coming round the corner and thought to myself ‘should I go?’ and I glad I did.”

Nigel says that Golvers Hill hasn’t had the best preparation in the run up to HOYS.

“I didn’t get all the work I wanted into him prior to the show, one of the reasons being he needed his back doing on Monday which meant I lost a couple of day riding him,” explained Nigel, who added he would love to compete at Olympia in December. “He’s a very careful horse that loves the limelight.”

Robert Smith completed a British one-two-three. He jumped a double clear in a time of 39.09secs riding Ilton.