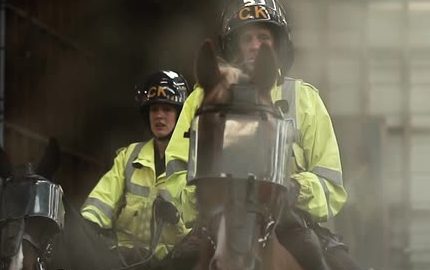 Three police horses have been honoured for their bravery at a special awards ceremony.

Greater Manchester Police’s (GMP) Hexam, Captain and Tangle (pictured below) were named public service animals of the year at the Animal Hero Awards 2016.

The horses braved fireworks and smoke bombs to prevent violence after a Manchester verses Liverpool football match at Old Trafford.

“It’s always noisy when those teams get together, but when the match was played we had lots of information coming through that the fans were getting really boisterous; there were smoke bombs going off and seats were getting ripped up,” said sergeant Cara Charlesworth.

“Two horses were initially in the car park, Hexam and Tangle, and then we needed some assistance because it was really a job for six horses.

“We managed to get one more horse, Captain, to assist us and from then it turned into chaos. They were throwing smoke bombs at us, all I could see was balls of fire whizzing past my head, and there were fireworks shooting by.

“It even got to one point where we couldn’t see. At the end of the day, horses aren’t designed to deal with that.

“Knowing that the horses did it and were listening to us gave me the confidence I needed to know that we could go in and do the job.”

Although the trio could not attend the award ceremony themselves, Metropolitan police horses Quantus and Nigel (pictured above) were brought to the event to support of their equine colleagues.

“I’m thrilled and incredibly proud to have been able to represent our mounted unit and officers,” said PC added Barratt.

“It was a humbling evening amongst so many inspiring people and animals.”

The awards, organised by the RSPCA and the Daily Mirror, celebrated inspiring examples of bravery, dedication and resilience in the animal world.

Two of the horses, Hexam and Captain, were present at a British Horse Society (BHS) and GMP road safety event earlier this year (28 May).

The event took place at Manchester Town Hall and was held in support of the BHS’s Dead Slow campaign, which encourages drivers to slow down to 15mph when passing horses.