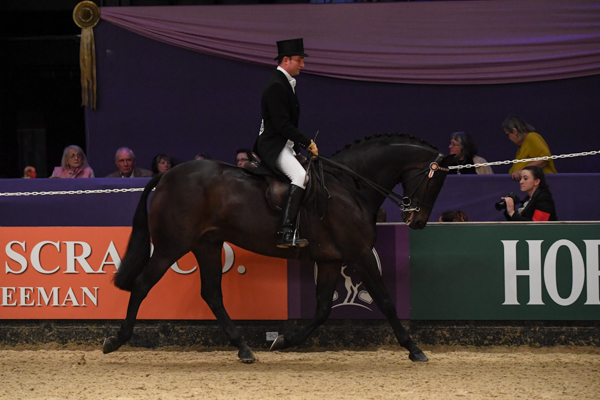 Diamonds Are Forever has become the 2017 HOYS (Horse of the Year Show) Ripon Select Foods Supreme Horse of the Year. This marks a huge double victory for this horse who also went supreme at the Royal International Horse Show this summer.

The eight-year-old bay gelding, ridden by Oliver Hood in the supreme championship was actually qualified by Oliver’s father, Allister when the pair took the large riding horse of the year title earlier today (8 October).

As Oliver and the horse, owned and bred by Annabel Jenks, were announced the winners, Allister, who had opted to ride his cob champion and last year’s supreme winner, Our Cashel Blue, punched the air with joy and gave Oliver a handshake.

“I’m over the moon — I can’t believe it,” said a delighted Oliver. “He’s a super horse and we’re lucky to have him. I know I can trust him on the go round but I was in two minds as to how much I could push him in there —and once we had got out first gallop out of the way, I knew we could go for it — he’s got fantastic paces and great showmanship.”

Despite having a huge amount of previous success in the show ring, this marked Oliver’s first ever HOYS supreme title.

“I tried to enjoy it, but there was a bit of pressure as this horse is unbeaten in all 15 of his shows this year,” admitted Oliver, who broke the gelding in as a four-year-old and did his first two shows before Allister took on the ride.

But the Hoods have taken their time with Diamonds Are Forever.

“As a four-year-old he went champion at Royal Windsor — that’s how good he is,” explained Oliver. “But we decided that was enough for him that year and turned him away. We took another look at him as a five-year-old, but he still hadn’t finished filling out. We did the same in his six-year-old year, so he’s only really been showing for the past two seasons since he was seven — it was a long wait, but it’s been worth it.”