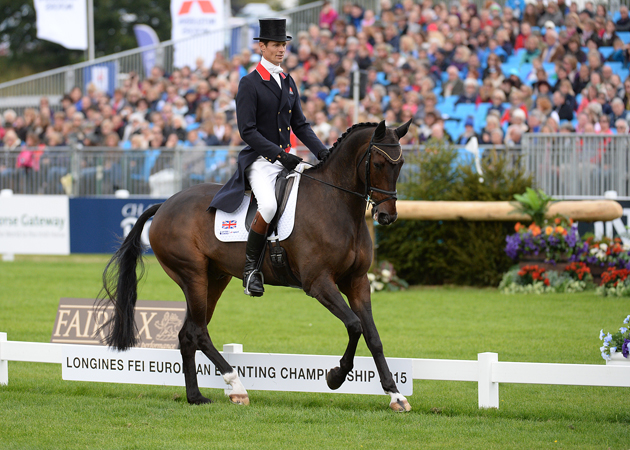 But there was disappointment for Britain’s final rider William Fox-Pitt this afternoon.

Although he and Catherine Witt’s Bay My Hero scored steadily at 7 and above in the canter, in the trot the horse seemed to be showing some irregularity in the rhythm, with the marks as low as 5 and 5.5 at times.

William went back to the stables with the horse afterwards and did not come over to talk to the press.

Bay My Hero’s best score at three-star is 35.2, but today he scored 43 and sits 23rd after the first phase. This means William is the team’s drop score.

This morning Pippa Funnell put in a good test for the team to score 41 on her own, her mother Jenny Nolan and Ruth McMullen’s Sandman 7. They are 19th, their test only marred by a break into canter before the shoulder-in left and an unwanted flying change on the final centreline.

Pippa Funnell and Sandman 7 at the European Eventing Championships at Blair 2015. Picture by Peter Nixon

“It’s his first test with grandstands like that and I could feel he was a bit nervous,” said Pippa. “He was trying hard. For a young horse and where he is in his career, I’ve got to be really pleased.

“The first time the horses really feel this atmosphere is just before the test as they don’t work near here the rest of the time. Another time maybe I would get him out more, but he had had plenty of work and it’s a balancing act as if you do too much they get sore.”

Overall, the dressage has been a brilliant two days for the British riders. All 12 pairs are in top 35, with seven in the top 12.

Germans in line for double gold

Only world champion Sandra Auffarth on Opgun Louvo could break into the top three riders today. She has taken the top spot individually, just 0.3 of a mark ahead of Holly on 31.4.

Sandra Auffarth and Opgun Louvo at the European Eventing Championships at Blair 2015. Picture by Peter Nixon

“I was very very pleased with my horse,” she said. “He was perfect. I could really enjoy the test. It’s always a nice feeling to hear I’m the world champion from the commentators as I’m trotting round — I think, ‘Oh, that’s me.'”

The other German counting scores come from Michael Jung, third on FischerTakinou, and Ingrid Klimke, who is eighth on 37.8 after riding this afternoon on Horseware Hale Bob.

“He was excited and when the wind was blowing outside he thought he was going across country, but he was so soft and supple I could think about my position and enjoy it,” she said.

France and Sweden are among the teams here who have not yet qualified for next year’s Olympics. They are currently in line for the two Rio tickets on offer to the top two unqualified nations.

Rain is forecast for tomorrow’s cross-country day, which is likely to make Ian Stark’s course more influential. Blair is renowned as a hilly track, so stamina will be essential for those wanting to stay at the top of the leaderboard.

Read more about all the British performances today, including video interviews

Re-live the dressage with H&H Live

Full report from the European Championships at Blair in H&H next week, out Thursday, 17 September — 19 pages of analysis and photographs, plus columns from Anna Ross, Harry Meade and Mike Etherington-Smith.