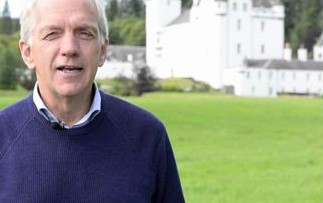 Ian Stark’s cross-country track for the European Eventing Championships is big, bold and has a fresh look, while using some of the features typically seen at Blair Castle Horse Trials.

“I’ve tried to create a course that reflects the heritage of Scotland and provides a true test of horsemanship without catching horses out,” says the 61-year-old Scotsman, for whom this is a first championship track as course designer.

“Blair Castle’s hills are well-known, but I have used them as sympathetically as possible. Riders who ′attack′ the course but who ride intelligently and conserve their horses’ energy for the later combinations should enjoy a thrilling ride.”

The cross country course starts on the flat with two straightforward fences – the Longines Flower Display and Mitsubishi L200s – to encourage horses and riders to settle into a rhythm, before the track begins to climb uphill to fence three, the Whisky Barrels Spread.

The beautifully-built course has a distinctly Scottish flavour to it, and the first combination on the course illustrates this – the Shepherds Bothies at fence 4abc. These three “houses” are to be jumped while turning a half-circle downhill around a tree and provide riders with their first test of control and accuracy.

They then gallop on to the Olympic Diamond, one of the legacy fences of the London 2012 Olympics at fence five, before heading uphill through the woods. On leaving the dark of the tree cover, horses and riders must tackle the white, upright Post & Rails Gate at fence six before heading up further to the highest point of the track and launching themselves off the impressive Leaf Pit Drop at fence seven.

The first water complex appears after a short run downhill to two imposing hanging logs with one stride between them at fence 8ab, the Hanging Logs and Water Splash. Horses will land after the second element and splash through the water, giving them a chance to get their feet wet before the two more serious water jumps to come.

It’s then downhill again to fences nine and 10, the Silver Birch Oxer and Wind Blown Tree – the first a big parallel on entering a wood, the second a “skinny” fallen tree on exiting it.

Riders will need to maintain their control and balance but also their impulsion when approaching fences 11, the Longines Lochan – a sizeable oxer at part a, and then a wooden fish, exquisitely carved, in the water at part b. They then gallop the length of the water before jumping up the step (12a, the Longines Fishermans Dream) with a bounce out over another carved wooden fish placed at an angle as part b.

Having tackled this demanding question, the ground rises up once again on the approach to fence 13, the Picnic Table. Then it’s on to one of the most exciting, visually impressive obstacles on the track – the Castle Wall & Cannon at 14ab. Here, horse and rider must jump up a sleeper-faced wall with a ditch in front into the gardens of Blair Castle before tackling a wooden “cannon” three strides later.

They then run downhill to the Stag Heads – a hanging log with huge carved stags’ heads with antlers that stretch nine foot on either side – at fence 15, before charging steeply downhill back to the flat of the showground. In the main arena, they must test their precision at fence 16ab, the UK Sport Corners, before heading to 17, the Joules Brush Arrowhead, a single, narrow fence placed cleverly on the lip of a “sunken road”.

The third and final water comes next – possibly the most challenging combination on Ian Stark’s track. It has a “Firth of Forth” theme – fence 18a represents the road bridge that crosses that iconic stretch of water outside Edinburgh. Once horses have jumped in over this first element, they must turn left and tackle the b part – an imposing reconstruction of the rust-red rail bridge, with the train as the jump, perched on a slope before the second water fence. In this, 19ab, Malcolm’s Lochan & Corner, an island fence in the water represents the new unfinished bridge and the efforts are completed by jumping a brush corner after exiting the water.

The Aintree Steeplechase Fence at 20 gives competitors a chance to regroup before they turn uphill for the last time and approach 21ab & 22, the Haggis, Neeps and Tatties. Carved turnips or neeps at the edge of a precipitous drop are followed by a wooden haggis on the slope, with the third part – a narrow box of tatties – at the foot of the hill. The three elements are on a straight line, but will require real focus and trust between horse and rider.

And the questions aren’t over. The next combination of fences, 23 & 24ab, are another demanding test. The Irish Horse Gateway Rails & Ditch Complex – two sets of upright rails with a ditch in the middle – will mean that riders must conserve their horses’ energy and be able to rebalance at this late stage of the course. Fence 25 is a Trakhener; then comes a real rider frightener– the EventScotland Hanging Keyhole at fence 26. This brush keyhole has an impressive ditch on the take-off side, which won’t worry the horses but might alarm their riders when they walk the course!

The last combination is two acutely angled hedges, the Strzegom Offset Brushes, at 27 and 28, while the final jump, fence 29, the Longines Final Fling, brings all the colours of Scottish tartan to a cross-country course.