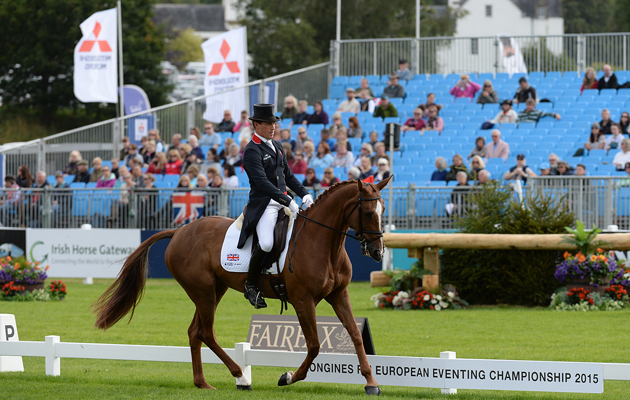 Find out how Britain’s riders performed on the second day of dressage (Friday, 11 September) at the Longines FEI European Eventing Championships at Blair Castle.

“It’s frustrating as I was hoping for a better score, but she was very good, so I was pleased with her,” said Izzy. “She didn’t do a lot wrong and I’ll need to watch the test [to see why the mark wasn’t higher]. She’s not a big front-moving horse and it seems like this ground jury like that.”

“She’s a new ride for me [taken over earlier this year from Ireland’s Aoife Clark] and a lot has been written in the press about how she can’t handle the pressure, but she relaxed and did a good job,” said Oliver. “I think it’s the first time she’s been in the 30s.  She went in there and coped well, so I couldn’t be more pleased with her performance.

“Obviously I didn’t get the ride because everything was going swimmingly before, and you can’t change the world that quickly. There’s still things I need to get to grips with and room for improvement.”

Oliver Townend and Fenyas Elegance at the European Eventing Championships at Blair 2015. Picture by Peter Nixon

Pippa Funnell, 46, with her mother Jenny Nolan, Ruth McMullen and her own Sandman 7 (team rider) — 41, 19th after dressage

“It’s his first test with grandstands like that and I could feel he was a bit nervous,” said Pippa. “He was trying hard. For a young horse and where he is in his career, I’ve got to be really pleased.

“The first time the horses really feel this atmosphere is just before the test as they don’t work near here the rest of the time. Another time maybe I would get him out more, but he had had plenty of work and it’s a balancing act as if you do too much they get sore.

“He definitely went a bit shy in there, but it wasn’t a bad experience for him and that’s the sort of experience they’ve got to have if they’re going to go to an Olympics. Some of his work was really good and that shows what a good horse he is for the future — hopefully he’ll go well here and then we’ll polish the work up over the winter.

“It’s always a huge honour and such a thrill to be chosen for the team. I possibly was a bit surprised because of Sandman’s inexperience, but what he’s done he’s done well. It’s rather the same as what the Germans have done with putting Michael Jung on the team [on an eight-year-old horse], but I’m not Michael Jung!”

Pippa Funnell and Sandman 7 at the European Eventing Championships at Blair 2015. Picture by Peter Nixon

“I was pleased with her — she was more tense than outside and lit up a bit, but I expected that as it was her first time in an atmosphere of this sort,” said Wills. “But she kept a lid on it and stayed consistent.

“I expected to be a lot more nervous, but I trusted her. I put myself in a bubble so it was just me and her in the arena. But it’s brilliant to have so much local support [Wills lives in Fife] and I’m looking forward to the rest of the weekend.

“I’ve always wanted to ride for Team GBR, but I didn’t quite think I was ready yet. But the selectors have showed faith in me.”

“I’m over the moon with ‘Smokey’,” said Francis. “He’s been working really nicely, so to go in there and do a test I can be really proud of is great. He was trying to spook at the boards round the arena, but he held it together and Catherine Witt and I are thrilled.

“I’ve had criticism for the length of his neck and I’ll probably still get it today, but it won’t go much longer! I was trying to show I wasn’t holding it in and the last extension felt really good.”

Although Bay My Hero scored steadily at 7 and above in the canter, in the trot he seemed to be showing some irregularity in the rhythm, with the marks as low as 5 and 5.5 at times.

William went back to the stables with the horse afterwards and did not come over to talk to the press.

William Fox-Pitt riding Bay My Hero at at the European Eventing Championships at Blair 2015. Picture by Peter Nixon