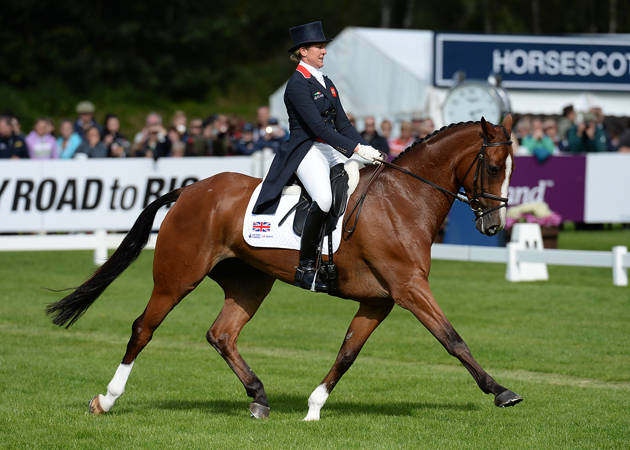 Britain holds the team and individual gold medal positions at the end of the first day of dressage at the Longines FEI European Eventing Championships at Blair.

This afternoon, British team member Nicola Wilson rode Mary and Gerry Kemp and Janine Shewan’s One Two Many to a personal best mark of 34.6. They lie third individually overnight.

“I’m delighted with him,” said Nicola. “He’s such a talented horse, but he can be a bit cheeky. But over the past six weeks he’s been getting better and better. He was lovely to ride today and I’m so proud of him.”

Nicola Wilson and One Two Many at the European Eventing Championships at Blair. Picture by Peter Nixon

Kitty King was first out for the British team this morning. Her score of 36.9 with Jane and Frank Inns’ Persimmon put her fifth at the end of the day.

“I’m not normally nervous before the dressage, but I definitely felt the butterflies this morning,” said Kitty, who is riding on the senior British team for the first time. “He can be tricky and you never know what day he’s going to do it, but he couldn’t have perfomed better today.

“I was worried the atmosphere would make him tense and tight, but he let me ride him. He just got a bit tight before one flying change and missed it, which was a shame — we had issues with it earlier in the week and they came back to haunt us.”

Nicola and Kitty’s combined marks give the British team a score of 71.5. France holds second on 75.5, led by Thibault Valette, who sits fourth individually. He rode a consistent test this morning on the attractive light bay Qing Du Briot ENE HN for a total of 36.8 penalties.

Germany is in bronze position on 76.6. Their first rider this morning was Dirk Schrade, who is now 11th with Hop And Skip.

“I know this isn’t his best phase, but he’s improved a lot,” said Dirk. “We had a mistake in the beginning after the first halt when he went backwards, but after that the test was really nice.”

Germany’s other team rider today was the recent Burghley champion and reigning European individual title holder Michael Jung, who slipped into individual second with the eight-year-old FischerTakinou on 33.5.

“This horse is nearly always relaxed, which makes working with him much easier,” said Michael. “He concentrates well.”

The standout performance of the day came from the youngest rider in the British squad, 21-year-old individual Holly Woodhead, who holds the lead individually.

She rode her father Ian and stepmother Heidi’s chestnut DHI Lupison through a beautiful test for a score of 31.7.

Holly was not put off when “Luke” spooked at a flower pot just a stride before he entered the arena.

“In the arena walk he was really good and I showed him the flowers, but I think he thought there was something in them,” she said. “He got over it quite quickly, though.”

Tomorrow, Pippa Funnell (Sandman 7, 11.57am) and William Fox-Pitt (Bay My Hero, 3.30pm) will perform their dressage tests for the British team.