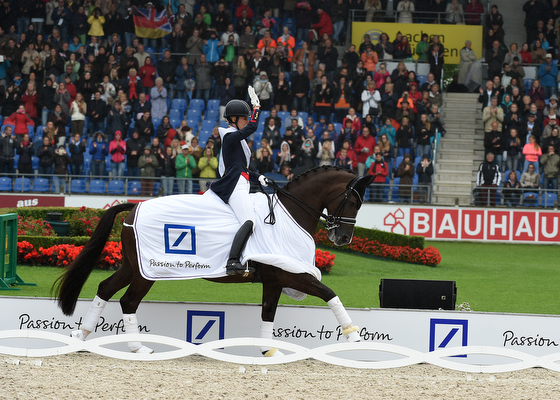 In a nail-biting finale to the FEI European Dressage Championships in Aachen, Germany, today (16 August), last-to-go Britain’s Charlotte Dujardin retained her freestyle title with Valegro – by the tightest of margins, just 0.25%.

It initially looked like it would be even closer, with just 0.1% splitting the two riders, before Charlotte’s score was revised up slightly.

Germany’s Kristina Bröring-Sprehe took silver and Spain’s Beatriz Ferrer-Salat stepped onto the podium for the first time at this championships to take bronze, riding a new freestyle personal best of 82.714% on the De Niro son Delgado.

The penultimate competitor, Kristina, laid down a massive 88.804% on Desperados FRH immediately before the British rider had to contend with wild and protracted applause from the 40,000-seater stadium.

Charlotte’s test started well, but she made mistakes in the first line of changes, and the second. She was able to repeat the two-times, but not the one-time changes.

“When you make mistakes in a test like that, you’ve just got to try to put it behind you and not dwell on it,” she said.

Charlotte Dujardin after their freestyle test at the European Dressage Championships 2015. Picture by Peter Nixon

Her compatriot Carl Hester rode to 79.5% and eighth on Nip Tuck – the highest-placed rider to score under 80% in an exceptionally competitive class.

Isabell Werth and Don Johnson slotted into fourth (82.482%) with their best ride of the week. Yesterday’s special bronze medallist Hans Peter Minderhoud and Glock’s Johnson TN finished fifth (82.411%), while Tinne Vilhelmson Silfvén and Jessica von Bredow-Werndl were the other two riders to top 80%.

For a full report on all the action, drama and medals – as well as analysis and comment – see the bumper European Championships Dressage Horse & Hound magazine edition, out Thursday (20 August).