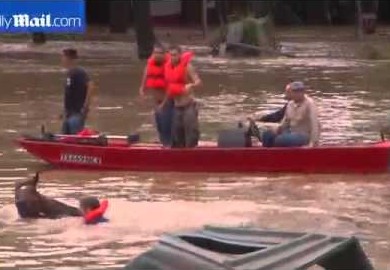 More than 70 horses have been saved from floods in a dramatic rescue in Houston, Texas.

The horses, from a yard near Cypress Creek, became stuck in the rising floodwater on Monday morning (18 April).

The animals were unable to swim to safety and some were trapped by fencing.

The horses struggled to keep their heads above the water in the strong currents.

Rescuers swam into the floodwater and used boats to reach the horses and guide them to higher ground.

Footage of one rescue (bottom) shows a woman wearing a life jacket guiding a bay horse to the water’s edge.

When back on dry ground, the rescuer explains that she had tried to take the horse, named Boomer, out of the water at an earlier point, but was swept downstream by the current.

“You have to convince them that your idea is the best,” she says.

“This one is real stubborn. Boomer is blind in his right eye and half blind in his left and he was fighting me.

“But eventually we both started fighting for the shore and we figured it out together.”

The incident follows widespread flooding in the area after a month’s worth of rain fell in one hour.

The downpour took place from late on Sunday to Monday morning.

Five people have died in the floods and homes have been destroyed.

At least 1,000 people have been evacuated from their homes in the north of the city and moved to a shelter, according to the mayor.

Rescuers have been saving people as a priority, but animal rescuers from Houston SPCA were called to the area to help the trapped horses.