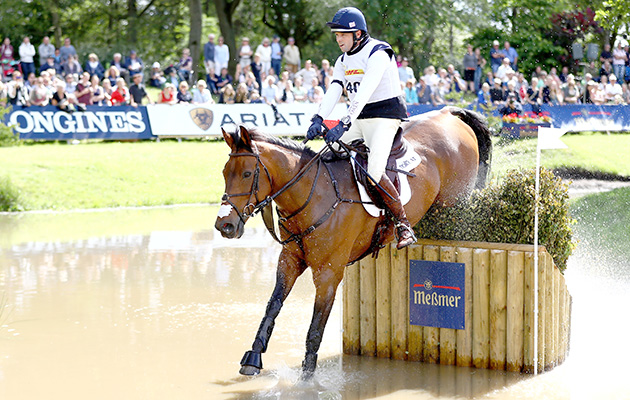 This might be the first Badminton Will Coleman and OBOS O’Reilly, but the pair come to the Gloucestershire four-star with a string of serious international results under their belts.

The 34-year-old, who competed at the London 2012 Olympics with Twizzel, is based at Tivoli Farm in Virginia.

After competing at the Land Rover Kentucky Three-Day-Event last week, where he finished 12th aboard Tight Lines, Will hopped on a plane to the UK to be reunited with his Mitsubishi Motors Badminton ride.

Will and the 15-year-old gelding are the highest-placed first-timers after dressage, lying in seventh place on a score of 24.6.

“I flew out Sunday night with my wife and eight-month-old daughter and we arrived here Monday,” said Will.

“OBOS had [already] been here for a few days, I worked him in on Monday and here we are.”

Will, who has two top-five placings at CCI4* level to his name, has previously visited Badminton, but this is the first time he has come here as a competitor.

He is also the only US rider to have taken the Bramham under-25 CCI3* title, which he won in 2003 aboard Fox In Flight.

“I’m elated, he was great,” Will told H&H after his dressage test.

“That was one of the better tests we have ever done and to do it here in front of all those people, he is a nervous horse and I couldn’t be prouder of him.

“We have been working a long time to get a test like that.

“He has a Jekyll and Hyde character — he is generally bold across country, but a little insecure in the dressage and when there’s a lot of people around.

“Conquering those nerves has been a big part of his career and I was so proud of him today because this would be as much atmosphere as there ever is in eventing.”