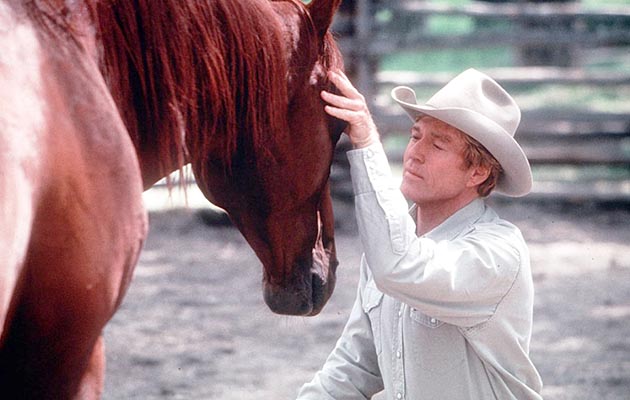 Based on a bestselling novel, The Horse Whisperer was a box office hit when it was released in 1998. Jen Scouler reminds us why it's such addictive viewing

The Horse Whisperer film is definitely a product of its time but is still a fun watch almost twenty years later, with its stunning scenery and a veteran Hollywood heart-throb. It’s a movie for a horse lovers, but also has broader appeal by being primarily a romance, making it a great film for watching with your rather less horsey companions.

The Horse Whisperer tells the story of young teenager Grace (Scarlett Johansson) and her horse Pilgrim, who are both recovering after a traumatic accident. At her wits end, Grace’s mother Annie (Kristin Scott-Thomas) takes them from New York City to the tranquil lands of Montana, where ‘Horse Whisperer’ Tom Booker (Robert Redford) is said to work miraculous results. Whilst their stay in the American West continues, Annie finds her own heart changed by the family’s journey.

Tinseltown legend and mature woman’s crumpet, Robert Redford directed as well as starred in the film. A lifetime equestrian, he started riding aged around five, and later gained his first job working at a stables. Many films in his acting career have involved him working with horses too, from classic western Butch Cassidy and the Sundance Kid to The Electric Horseman. The actor has also long campaigned for equine issues and still does to this day.

When it came to portraying Pilgrim, it was crucial that the horse playing him had to be the best. The horse had to look and act damaged, and it required a lot of prosthetics and difficult training to make that believable.

The chosen horse for this task was a movie veteran named High Tower. A chestnut quarter horse, he was owned by Hollywood trainer Rex Peterson and featured in a great number of films over 18 years. Readers may even recognise High Tower as the horse that Julia Roberts rode to flee her movie wedding in the iconic opening scene of romantic comedy Runaway Bride.

Thanks to Redford’s extensive history with horses, it’s easy to see on film just how comfortable he is riding in this movie. It’s an important factor of course, and there is always a little joy for horsey film fans when the actor playing the character can actually ride. It’s not difficult to see those tricky moments cutting the rider’s face out of shot, whilst the ‘actor’ suspiciously grows or shrinks a notable few inches.

In its stunt work, the film does attempt to emulate some of the real life practices of ‘horse whisperers’. The filmmakers received some criticism for not being wholly accurate in portraying rehabilitation and training, although understandably for movie magic, the process was sped up to allow the plot to progress steadily in 120 minutes.

The Horse Whisperer is rose-tinted to the extreme, and some may find that the portrayal of horse training is a little too glossed over in favour of the romance between Annie and Tom. In terms of horsey films, it’s surprising how horse-lite the movie is. Yet as an advert for riding in Montana, it’s impeccable. The sequence in which we follow Annie and Grace’s car through spectacular vistas was so impressive that I just about packed my bags there and then.

Despite their smaller role, there is a real respect for the animals throughout the movie and it features a great part on the history of horses. However, it’s also a film about knowing where you belong, as Annie has to make a Casablanca-esque choice between two paths and two men. Her decision is tormented and undecided until the very end, making it a very affecting watch. As for me, I’ve decided. I’m hoping for some great January sales on trans-Atlantic flights.