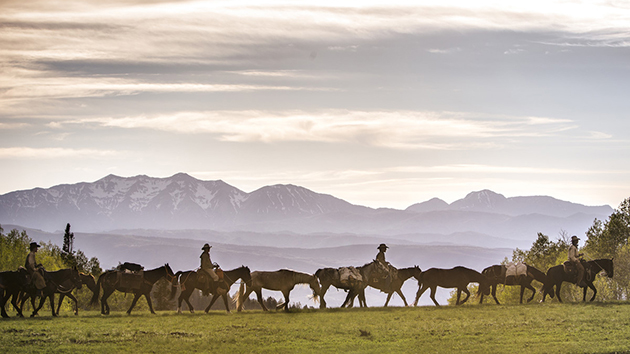 Unbranded, the equestrian documentary based on Ben Masters’ best selling book about a 3,000-mile journey from Mexico to Canada through America’s West using wild horses will open in UK cinemas on 27 November 2015.

Four friends embark on an epic, life-changing adventure. Their aim is to travel on wild mustangs across the American Frontier, from the Mexican to Canadian border through the majestic Grand Canyon, Yellowstone and Glacier National Park.

For their trail horses, they adopt wild mustangs from the US Bureau of Land Management, which are perfectly adapted to the rocky terrain and harsh conditions of desert and mountain travel.

Ben Masters recruited riders Jonny Fitzsimons, Thomas Glover, and Ben Thamer to join him on his quest and brought director Phillip Baribeau on board to guide the film’s production.

Ben then inspired and persuaded organisations and individuals from around the world to join the Unbranded mission, which resulted in crucial funding for the project.

During the ride, Ben was charged with the mapping and logistics for 16 horses travelling through unpredictable terrain with changing landowners, agencies, and restrictions.

Chosen to inspire adoptions from the 50,000 mustangs and burros in holding facilities across the United States and to call attention to the importance of rangeland management, these animals become their riders’ transport, nemeses, and eventual trusted companions as men and mustangs traverse the immense landscapes of Arizona, Utah, Idaho, Wyoming, and Montana.

Facing a whole range of adverse conditions including snow, downpours, wildfire, unrelenting heat, raging rivers, sickness, injury and even death — this is a testing journey for riders and horses alike.

The film has been awarded The Telluride Mountain Film Audience Award and the Hot Docs Canadian Film Festival Prize for Best Documentary.

Unbranded will be in cinemas on Friday 27 November 2015

Find out more at unbrandedthefilm.com