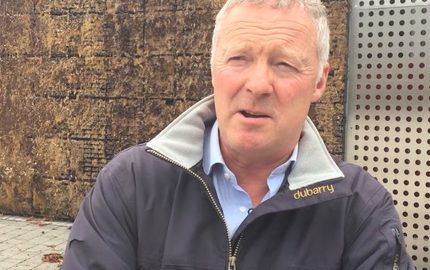 Rory Bremner, impressionist and very funny man, could be found lurking in the NEC car park this October, supporting his daughter Lila, 15, who had qualified for the pony Foxhunter and newcomers — and finished fifth in the latter.

Having spoken to him for an interview in Horse & Hound magazine, which he peppered with hilarious impressions of equestrian legends from Nick Skelton to Sir Peter O’Sullevan, we couldn’t resist asking him to do a couple of impressions for a short video here.

Being at the Horse of the Year Show, commentator Nick Brooks-Ward, who has been the voice of the show for some 15 years, immediately came to mind. So too did former international showjumper, trainer and Horse & Hound columnist Graham Fletcher, whose sister-in-law Fiona Hobby currently trains Rory’s daughter Lila. Have a listen to Rory’s uncanny observations.

You can read our full interview with Rory in this week’s issue of Horse & Hound (15 November 2018), where he talks, among other things, about the parents he knows who are introducing their daughters to as many drugs and boys as possible in the hope they won’t take up ponies…

Rory has resigned himself to many years of pony parenting, saying: “My wife [sculptor Tessa Campbell-Fraser] said ‘it’s only two years’ [of Lila riding in ponies], well that was a year ago, and there’s already a new horse for Lila to bring on so she’s ready for the level as soon as she comes out of ponies. I might as well stand in the middle of the M1 and tell the cars to turn around.”

He is open in the interview, too, about why, whereas in his day job he is critical of British politics and campaigning for a People’s Vote, in equestrianism he has chosen to stay out of the politics.

Rory is putting a lot back in to the sport, from commentary at Badminton to speaking at Pony Club conferences, in-between his TV and show commitments. He is proving a hit in the horse world, his charm, humour and approach of “being as nice as possible to as many people as possible” has seen him welcomed into the fold.

“They’re very tolerant of this ignorant idiot who loves their sport,” as he puts it. However, we’re unlikely to see him on a horse any time soon, as he says: “It’s important to have one member of the team on the ground. And if I did get on a horse, I’d find myself on the ground again very quickly anyway.”