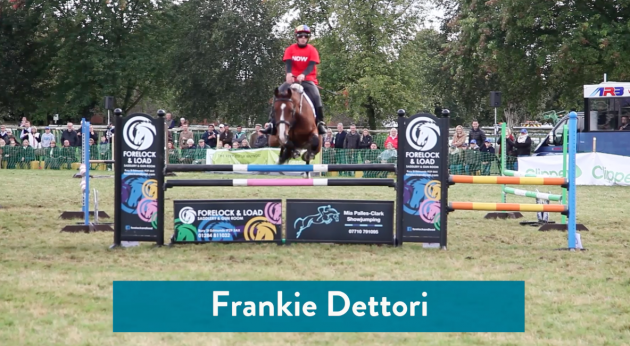 Frankie Dettori, Jamie Spencer and Ryan Moore may be champions on the racetrack, but we don’t think Scott Brash and John Whitaker have too much to worry about… Just yet

Frankie Dettori, Jamie Spencer and Ryan Moore plus plenty of other stars of the racing world lined up gamely to take part in the Clipper Logistics Racing Personality Show Jumping Competition at the 32Red Newmarket Open Weekend (16-17 September 2017). And apart from ITV Racing’s leading lady Francesca Cumani, who rode an immaculate clear on a 21-year-old 138cm pony to win over the coloured poles, it’s safe to say they shouldn’t give up the day jobs.

Jockey Adam Kirby and trainer Roger Varian battled on, despite some dramatic refusals, while it was a case of “Well sat!” for James Doyle, whose pony threw in a buck or two.

And as for Frankie Dettori, well he must have had victory — and a trademark flying dismount — in his sights, having been mounted on the smartest horse in the field, his daughter’s talented eventer. But the eagle-eyed judges spotted Frankie’s “short-cut” — he missed out fence five altogether. Nice try, Frankie!

This was the third year of the competition organised by Newmarket-based British Showjumping coach Mia Palles-Clark.

“Though he missed a fence, Frankie Dettori really upped the ante by borrowing his daughter’s posh event horse!” she said. “It was a lovely day and a lovely class. I trained the riders who could make it on the Monday before the event and the horses were sourced by me and the riders themselves. Francesca rode really well.”

This popular weekend of activities, when the public have the chance to go behind the scenes at British Horseracing’s headquarters in Newmarket, also featured a football match sponsored by Martin Collins Enterprises, where the team of jockeys and trainers, led by captain Oli Bell, beat the stable staff 5-2.

Over the past four years the event has raised £225,000 for local charities and this year’s beneficiaries were The Racing Welfare Newmarket Housing Project, the Newmarket Day Centre and the Newmarket Academy.