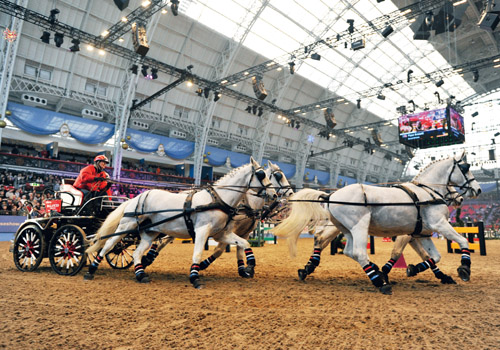 Don’t know much about carriage driving? Not sure what all the fuss is about? Ahead of this year’s Olympia Horse Show (15-21 December 2015) Team GB carriage driver Dan Naprous gives us a taste of the high drama, adrenalin and pressure of the sport.

“As soon as you enter that ring the only thing going through your mind is that course,” says Dan. “You need to really know the course so you can drive as fast as possible.

“With indoor carriage driving there’s so much pressure — the speed, the time… you’re looking for centimetres. It’s not inches.

“The acceleration in the team is fantastic — it’s the equivilent of driving a super car. The adrenalin — you’re in there, it’s fast and then you’re out.”

From loose horses, Johnny Depp's saddle slipping and a serious booting, films and TV shows have provided us with som

This year, Dan Naprous will return to Olympia to compete in the extreme driving competition, representing Great Britain.

Dan formed his own Team Naprous carriage driving team in April 2005 when he made the change from competing in club events with horse pairs to international events with his team of Lipizzaner stallions and gelding.

Dan combines his carriage driving career with stunt riding — best known for his appearances in Game of Thrones,  Suffragettes and the BBC’s Wolf Hall, among other film and TV titles. He can also boast being fire eater, juggler and unicyclist on his CV.

Since its inception at Olympia only four years ago, the adrenalin-fuelled extreme driving competition is a favourite among regular visitors to the show, who are treated to the world’s top four-in-hand drivers manoeuvring their horses at speed round an exacting course.

The extreme driving competition takes place in the afternoon on Thursday 17 December and the first round of the FEI indoor World Cup driving is on Friday 18 December.

Spectators will also be treated to top class dressage and showjumping during the seven-day show, plus the Shetland Grand National and displays by Jean-Francois Pignon as well as the Household Cavalry.