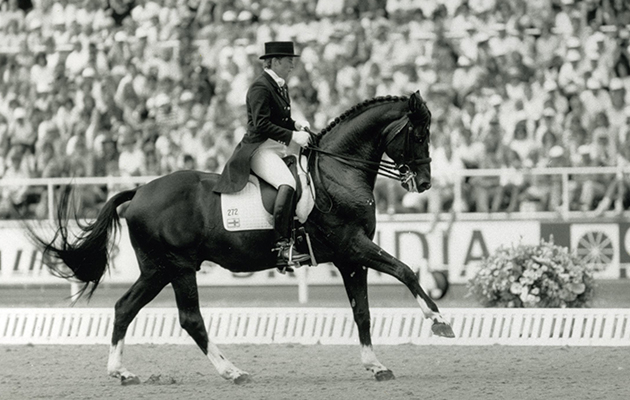 At the recent Global Dressage Forum held at the Bartels Academy in Holland (26-27 October), seven horses were put forward as the best the sport has ever seen. Here are some lesser-known facts about Matador, one of the nominated greats of the sport

Matador was a very successful grand prix horse, but in the early years Kyra struggled to teach him how to “hang in the air” in the extended trot. Her solution?

“I took him outside and ran him in trot into the deepest part of the sand. He brought his legs high up in the air, and I said, ‘Good boy!’. As soon as he understood what I wanted, he could do it.”

Their inventiveness didn’t end there. Kyra made up moves never before seen in the dressage arena, namely turning piaffe pirouettes into canter and back again, smooth as silk. She often rode chunks of her freestyle with one hand, too.

Matador survived a colic operation and went back to competing at the highest level. He won the World Cup final in Paris in 1991, which he attended on a wildcard. However, this was in the days of the cassette tape and Kyra discovered just days before the show that the music was 15 seconds too long. The first time she ever rode to the new cut of the music was in the competition arena. She admits to improvising at the end, unsure of how much longer the music would run for.

“I just kept piaffing until the music stopped,” she recalls. “But it was OK because Matador could do it all day.

The horse had a 3000-strong fan-club; quite something considering this was in the days before Facebook and smartphones. There were two full-time members of staff who administered Matador’s fan-club.

Once, the fans all knitted a square of wool, which the staff sewed together and Matador and Kya wore. It wound many times around the horse’s neck and the rider’s body.

Eventually, the horse was sold to a Japanese rider and Kyra said she was happy to help the new rider, but that message was never passed on, and the new rider thought she was furious about the sale. What a wasted training opportunity!

When Matador retired, he went to stand at the same yard as his sire, but the two hated each other with a passion and a new stable had to be built for Matador further away from May Sheriff. He is buried in Denmark under a birch tree, which is the Finnish national tree.

He was “a real athlete but a cuddly teddy bear”.