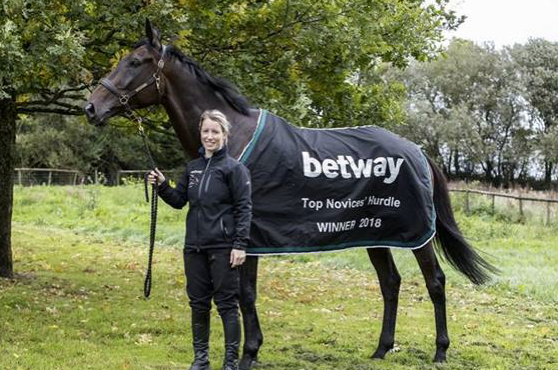 It has been an incredibly tough year, to say the least, for National Hunt trainer Kayley Woollacott. The 32-year-old has taken over the training licence from her late husband, Richard, who took his own life as a result of mental health problems.

As the new National Hunt season kicks off, Kayley and her Devon-based team are bidding to celebrate the life of Richard with more Grade One success for their stable star Lalor, under his regular rider and the champion jockey Richard Johnson.

Already the “horse of a lifetime” having won the Grade One Betway Top Novices’ Hurdle at Aintree in April, Lalor is being targeted at the big Grade One two-mile novice chases this season. He is set to make his first appearance of the new jumps campaign in the Racing Post Arkle Trial at Cheltenham (18 November).

In the first video in a series of short films produced by Betway, Kayley — mother to three-year-old Bella — discuss the tough decision to continue training after Richard’s death, what Lalor means to her family and why this “lottery ticket” of a horse is capable of continuing Richard’s legacy.

“Lalor meant the world to Richard and has brought us many memories both before and after he passed away. It’s only right we look to continue his legacy through Lalor this season,” she said.

‘While nothing will bring Richard back, I feel there is more there could, and should, be done to help others’

Figures from the racing world have been paying tribute to the Devon trainer, who passed away today (23 January)

Kayley trained point-to-pointers as a hobby while studying at the Cirencester Royal Agricultural College. On graduating, she moved down to Devon to be with Richard and now has more than 15 years’ experience of training pointers.

Having made the decision to continue to train the horses in Richard’s absence, she has shown dedication, determination and pure love of the sport in abundance.

For all the latest equestrian news and reports, don’t miss Horse & Hound magazine, out every Thursday.