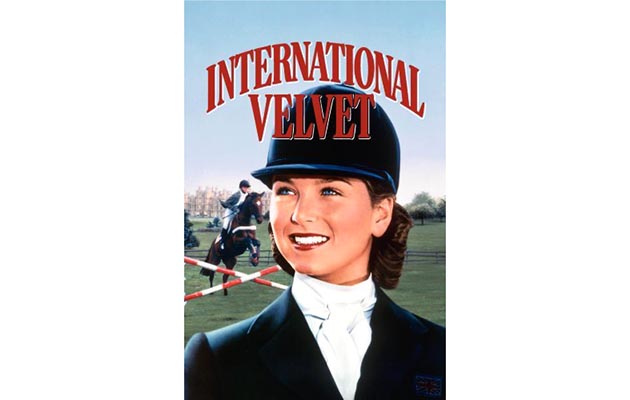 Give yourself one last treat this Christmas break and settle down for an evening with International Velvet, says Jen Scouler

After the classic Hollywood spectacle of National Velvet, horsey film fans had to wait even longer than today’s Star Wars fans for a sequel to their beloved movie. In fact, it took no less than 34 years for the appropriately titled International Velvet to be released in 1978. Although different to the film it claims to follow, the spirit of the story remains the same, informing audiences that anything is possible with hard work and self-belief.

International Velvet returns to our heroine Velvet Brown (Nanette Newman) as an older woman living on the English coast, with her beloved horse The Pie enjoying his retirement. However, her peaceful life with her partner John (Christopher Plummer) is turned upside down when her orphaned niece Sarah (Tatum O’Neal) comes from Arizona to live with them. Sarah, inheriting her dedicated attitude from Velvet, finds a purpose in her strange new home: to compete in the Olympics with The Pie’s last bred descendant.

The horse who portrayed Sarah’s horse Arizona Pie was already a gold medallist before he became an onscreen Olympic contestant. The equine actor was a 17hh thoroughbred named Cornishman V, who was bought as a young horse by equestrian Mary Gordon-Watson’s father at a farm sale.

He proved to be a good buy, and represented the British eventing team at the Olympics as they won team gold in both 1968 and 1972.

A lot of International Velvet’s third act involves footage of real event riders, including British Olympian Richard Meade. However, actress Tatum O’Neal had to work hard to portray a riding professional, having only ridden Western prior to the film.

Once she’d been given the part, Tatum was trained in Los Angeles by horsewoman Marcia Williams and within two months was jumping a course of three foot fences. Equestrian professionals who advised the production were impressed by her natural ability and Tatum was able to do an admirable amount of riding herself onscreen.

The movie as a sequel

If you’re a pernickety viewer, as this writer can be, it’s easy to get distracted by how inconsistent International Velvet is as a sequel to the Elizabeth Taylor classic. Examples such as the Pie making a mysterious transformation from a chestnut gelding to a bay stallion, and a rather harsh treatment of younger brother Donald’s adult character are all hard to swallow for a devotee of the original.

However, just like National Velvet, the crucial heart of the film comes from the central familial relationship, as an older Velvet struggles to care for her grieving charge. Their relatable struggles and final reconciliation is as heartening as the original’s scenes with young Velvet and her kindly mother.

Abandoning the Californian gloss of its inspiration, International Velvet shows us the real Britain of the 1970s, with an equestrian community at its peak. The scenes of Sarah riding Arizona Pie across a beach in Devon are gorgeous, yet never overly idealised. It’s also probably the only film you’ll ever see that involves a chase between a horse and a Mini Cooper.

At 15 years old, Tatum O’Neal does an excellent job in realistically portraying Sarah across an adolescent time span of several years. Despite the character being occasionally unlikeable, she is earnest about learning from her mistakes and you’ll find yourself rooting for Sarah as she takes on the sporting world.

An odd highlight occurs in the final section of the film, where the movie gives itself to almost entirely showing live footage of a three day event. It’s an excellent time capsule of the era, but what really stands out is some witty commentary. A particularly good example of the quotable lines is the wonderful: “Dressage in pouring rain is like dancing Swan Lake in clogs in a bog.”

For horse lovers, the film has a gentle heart and it provides more than enough equine screen time to enjoy. Whilst International Velvet is not a perfect film by any means, it’s a great film for a quiet afternoon and an effective, nostalgic look back at British eventing’s golden age.