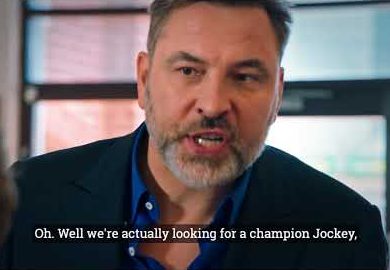 What happens when one of the best-loved comedians meets one of the world’s best jockeys, but has no idea who he is?

David takes on the role of young actor Billy Jenkins’ father during a day at the races but, unaware of Ryan’s status as one of the world’s best jockeys, David immediately causes awkwardness by asking the top rider where they can find “a decent jockey” — much to the embarrassment of young racing whizz Billy.

“My kids love David Walliams, so I knew that there would be trouble if I didn’t get involved in the filming with him,” said Ryan. “I think this is a great initiative and it’s so important that we get more children and families involved in the sport and coming racing.”

David Walliams added: “This campaign is great — so often kids’ days out can be expensive for the family so this could be a fun day out for everyone, where kids go free. There are a lot of fun things children can do at the races, so it’s great to be part of a campaign to educate families.”

The campaign highlights more than 200 racedays around the country taking place during the school holidays — including over 50 dedicated family racedays. Under-18s are admitted free of charge when accompanied by an adult and can enjoy the thrilling action on the racecourse, plus free additional activities including pony rides, fairgrounds and much more.

If you aren’t going to Royal Ascot in person, you can enjoy all the action brought to you by ITV

“We are really pleased with the reception that the ‘Under-18s Race Free’ campaign has had so far and it’s brilliant that someone as high profile in the racing world as Ryan Moore has come on board to help us get the message out there,” said Rod Street, chief executive of Great British Racing. “The summer holidays are now only a few weeks away, so now is the time to be planning your family’s trip to your local racecourse.”

For all the latest equestrian news and reports, don’t miss Horse & Hound magazine — on sale every Thursday