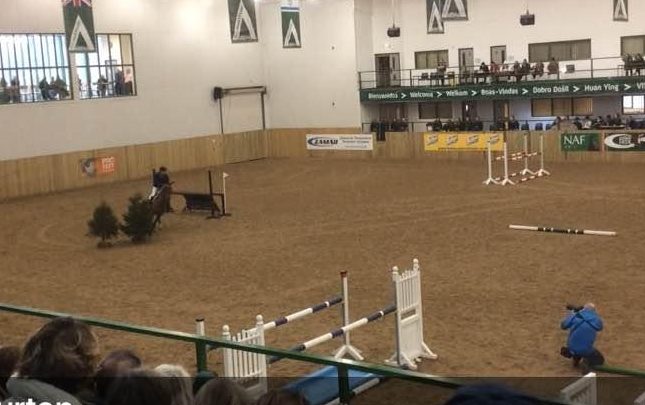 Burghley winner Chris Burton is the fastest rider in the world, according to eventing statistics company EquiRatings. At the International Eventing Forum at Hartpury on Monday (6 February 2017) he explained how he trains and rides his horses to consistently achieve speedy times across country…

1. In Forumula 1, to succeed you need to be brave, have good lines and good brakes. That’s what we need too. Good brakes are what we need so that we can gallop to fences and slow down late, rather than having to waste time setting up further from the jump.

2. Riders shouldn’t kick all the time or horses stop listening. It’s the same with husbands!

3. Legs are for going, hands are for stopping. I want it to happen off light aids — I believe in happy horses and harmony — but sometimes that means giving a stronger aid when you are teaching the horse if he doesn’t respond to a gentle one. We ask them to slow down by pulling — if they don’t stop, pull harder. It’s simple! (Chris warned at the start of his talk that it wasn’t going to be politically correct, in doing so acknowledging that such a blunt approach might not be to everyone’s taste. But it was clear he was training towards ultimately being able to use extremely light aids, rather than having to continually nag with stronger ones.)

4. Once a horse understands the rein and leg aid, you can teach a seat aid — I use a light seat aid for instructions such as halting from canter in the dressage test as the judge can’t see it and the horse responds without resistance.

5. Sometimes slow is quick — if you can make a tighter turn to and away from a fence from a slower pace, the overall result will be a faster round than one where you are travelling faster but have to cover more ground (see video above).

Chris Burton has won Adelaide CCI4* twice and took top spot at Burghley CCI4* last year. He was fifth at the Olympic Games in Rio in 2016 and a member of the bronze medal-winning Australian team.

Next year’s International Eventing Forum is on 5 February 2018.