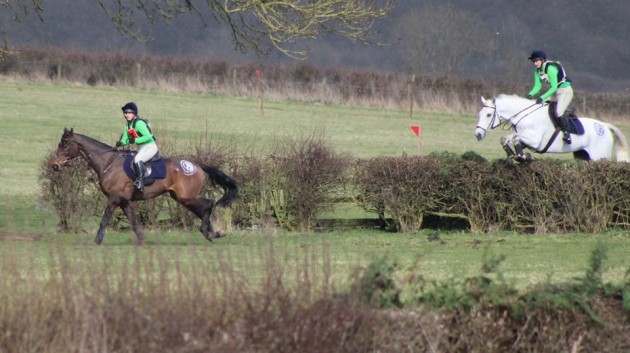 Firstly, a humongous thank you and a massive well done to the organisers of the Fernie team chase (27 March). Many of the earlier dates in the calendar have either been postponed or cancelled thanks to the awful weather we have been suffering. The torrential rain the evening before meant we were all on tenterhooks waiting for the announcement they make following a course inspection first thing in the morning.

Easter Sunday arrived and we were thrilled to see the posts appearing on social media saying the sun was out and the team chase was go, go, go. The lorry track at the entrance made a phenomenal difference to the parking and the expert tractor team were running a faultless operation — thank you, everyone really appreciated the efforts.

We had a very relaxed day, not running until 3.43pm which meant a casual 1pm course walk. Having travelled up with revisiting team mate Briony we found Kerrie in the car park and met Izzy out on course. Briony ran with us at a couple of novices last year and having heard how lovely the intermediate course is at Fernie didn’t take much persuading to join us to have a bash at an intermediate class.

Fence five was a sizable rail/hedge and fence six was “the drop” of the day. Entertainingly, before we started our course walk we had watched a few of the open teams jump the drop and a couple in our accompanying group passed comment on how nuts the open teams were to jump such stupidly scary fences… the silence was notable when they realised that fence was in our class too.

Walking to the start

The going out on course was incredible. As usual for the ever popular Fernie the novice class had run at full capacity, the intermediate and open course ran mostly on fresh ground and it had taken the battering of the previous night’s rain amazingly well. Nothing on the course was of worry, a bit of an interesting approach to a log thanks to a sensibly roped off wet patch — it would take some slightly more calculated riding but apart from being out of puff thanks to suffering a grim cold, we finished our course walk feeling pretty positive.

Tacking up was a much more fanciful affair as a team sponsor, forelockandload.com had arranged for an armoury of glitter from glamouratiuk.com to embellished our horses’ rumps. With tack and turnout normally being limited to a quick wipe over, the stencils and make up sponges got the giggles going and at one point we even had a little crowd going of interested fellow competitors. This sort of thing isn’t usually seen in the fields of team chasing but what a brilliant way of branding a team. The stencils worked really well and the intricate logo glistened beautifully in the Leicestershire sun!

With our new super snazzy Thermatex saddlecloths and some rain resistant brave-pants breeches we headed to the warm up for a quick jump before going under the starter’s orders.

Fences one and two rode well in behind Kerrie and Izzy. Fence three made you realise you were doing an intermediate class and fence four jumped kindly with me now in second place behind Kerrie. On the gallop across to fence five the sky went apocalyptically dark and the heavens opened. Sharp, freezing hail stung our faces as we approached the “drop of doom” (as we now affectionately call it). It rode beautifully, totally uneventful and almost a bit of an anti-climax but I was thrilled that we had all sailed over it and we cracked on over the next handful of well-presented rails and hedges in now bright sunshine.

A sharp left after fence 11 to the wet patch and onto the log; the going got suddenly deep which helped to steady the horses. Taking a tight line around the safety tape with Harty in the lead he just didn’t have time to work out what Kerrie was asking of him and ground to a halt (pictured above). Super Kitkat bowled on through and we headed into the pen with Izzy close behind and waited for the essential third horse. Briony was there and we kicked on to the next. Swiftly overtaken by Kerrie, she retook the lead before the water and we were flying.

Izzy having a great ride

>>> Sophie Mathew’s team chasing blog: A step into the unknown

A couple of fences later a front shoe came flying off Kitkat, a few more fences and I had ended up with my nose just in front of Kerrie. I went soft on my horse and knowing he’d lost his outside shoe didn’t haul him into the direct line of angled hedges. I hadn’t appreciated how close Kerrie was behind me and as I opted to take a turn and I took her and Harty with me.

Jumping out of the pen

Fortunately, Izzy got a great clear line through the three hedges and she raced on to the end to the finish with Kerrie quickly catching up with her on super speedy Harty. Kitkat was eager to take up the pursuit and the soft ground meant we could swing home over the final few fences minus his lost shoe.

Briony had pulled up just after the water, absolutely beaming with her horse, saving him for another day. Massive hats off to her; she doesn’t hunt and is yet to event Alfie over 90cm so it was an incredible effort on her part and I’m really proud of her.