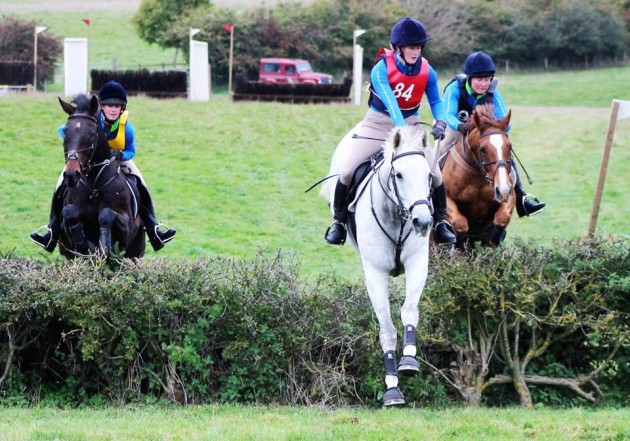 It must have been over 12 years ago when I completed my first team chase. At the time it was the biggest course I had ever jumped; we came fourth and won best Pony Club team. What a fab pony I had in Impact. I will never forget the kindness of his owner Maggie.

That was the Grafton team chase and heading back there for the first time since moving away from the area was nostalgic.

After our amazingly brilliant time at the Pytchley last week we were really excited to be heading to another intermediate class. We’d seen the course photographs that had made their way onto Facebook the evening before and so knew what to expect — nothing daunting, a couple of turns, more timber than at the Pytchley and some hedges towards the end of the course.

We met with Lily, a new recruit for the team at the first fence ready for our course walk.

The course is definitely a kind one. Some of the fences wouldn’t be out of place in a soft novice track but with the undulations, twists, and sharp turns there was plenty to keep it competitive and the hedges were all well-presented — they had the nice low rails, good ground lines and a fair amount of hedge above them.

After walking the course we found a couple of friends that had run in the morning’s novice class. Between them they had landed both first and second place. Smiles all-round and some hilarity over the fact that the winning team took a break mid-way around for one of their team members that had fallen, she was perfectly fine but it did suggest their bogey time was a slow one.

Another friend’s team that were far too fast for placing, joked that maybe a ‘fair hunting pace’ included time for drawing a covert and stopping for second horses! It does seem a shame that there isn’t a declared mpm speed for bogey times in both the novice and the intermediate bogey classes. Having a bogey time that is too slow is rewarding those that have either stops or mishaps at the pen with rosettes.

We were entered in the bogey time but in the knowledge that there is no telling whether it was a quick time or a slow one we opted to just to crack on as well as we could — we thought it better to be unplaced for going too fast (hopefully!) than trying to aim for a bogey time and getting it wrong.

Smiling before the start

The warm-up was hectic, but there was room up the top to keep out of the way, so once we had jumped the warm-up fence a few times we went up there to get some space to ourselves. Kelly’s horse Bluey was just a bit on his toes and he can go one of two ways so we tried to keep him chilled. With him in such a tizzy mood he was going to have to go up in the front where hopefully he would settle.

As the starter was counting us down from five seconds Bluey was ready to go and to prevent him jumping the gun Kelly had to take a turn, the flag was dropped and we were off; Kerrie, me, Lily and Kelly swinging behind.

Kerrie, Lily and me. Courtesy of Picasa

We flew the first, a small timber. By the second I was in front. I looked across at Kerrie for her to take the lead but she stayed in second, so I kicked on for the third. I later found out that Kerrie thought I was Kelly and so had held back for her/me to take the lead — this is the problem with us all wearing the same tops and both being on greys!

I lead over the fourth and fifth, but struggled to make a tight turn back to the other island fence. I didn’t want to slip over so knowing the other girls were right behind me, I kept a wide line and Lily took the lead on her nimble chestnut, followed by Kerrie.

Lily, Kerrie and me. Photo courtesy of Neale Blackburn

From the next hedge we bowled on down to the pen. The three of us getting to it altogether; no need for the lead horse to take a pull, and with it being plenty wide enough, Kerrie, Lily and I jumped in and out pretty smartly; although I did apologise to Kerrie as I jumped in for cutting her up slightly.

On to a hedge. I was sat quite comfortably in third. I had no idea at this point that Kelly had pulled Bluey up. We were travelling at a pace that was perfect for Kitkat and we were meeting the hedges and rails perfectly.

The other two girls hugged a post at the top of the hill for the turn towards the home straight. Again I wasn’t quite so confident so took a slightly less daring route.

By fence 16, which was the bigger of the hedges, we were all together and I had a moment of panic thinking I had nowhere to go if anything went amiss in front of me. Fortunately it was an unnecessary concern as the three of us flew it and the next. We steamed down the hill towards a timber, where Kerrie had to kick on to get in front of the group as it was a bit of a squeeze for all of us to jump at once. Kitkat could see the lorry park and ran on to the front, sailing over the hurdle and cruising up to the last.

What a great feeling as he popped over it effortlessly, picked up the bridle and ran on to the finish. Such good fun! We finished on a time of 4 min 52 secs, against a bogey time of 5 mins 20 secs. Happy horses and happy people. We relived it all the next day with such brilliant photographs from Neale Blackburn, Sandra Aschettino and Posy Spencer — thank you.