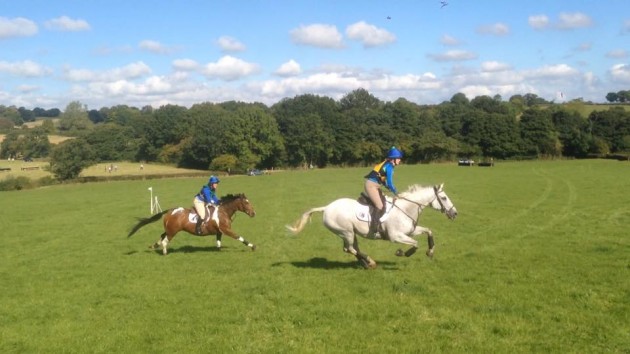 Setting off at such an early time is a pretty unattractive task but the 150 odd mile journey to the Meynell & South Staffs team chase was made so much better as I had company.

My team-mate Amelia and super volunteer cameraman/groom/driver/entertainment that is Rachel, who gave up her run in the team so I could take it, helped make the journey bearable.

Desperate for a cheeky snooze on the way up Rachel ensured that was impossible and the conversation quickly turned political. I was educated on what ‘Dave’ got up to in his uni days — not great imagery for someone only half awake! From this, we had the great debate of how far is too far to travel for a competition. As the blanket of mist lifted as we arrived at the team chase our deliberation was concluded; as far as it takes for views like the one we were granted with at the Meynell & South Staffs team chase. It was absolutely stunning and the sun had burnt away the mist and it was warm — T-shirt warm!

Unfortunately Kelly decided to not run as her little boy was suffering from a yucky cold. So after a quick search for a reserve we ended up running as a team of three which is a risk but we were confident that the three of us would look out for each other.

Me (left) with my team-mates

Walking the course we were impressed with the going and the grass covering. We had opted to enter the novice in fear of potentially hard ground which was probably a mistake in the end. The intermediate track looked lovely. There were definitely a couple of hedges that you wouldn’t want to walk right up to due to the ginormous drop on the landing side, but it is a course we will pencil in for next season.

The novice track had some kind questions and was true to novice height. After a couple of jumps over the warm-up fences it was obvious that my brakes weren’t working as well as they should and I was eager to get under way.

I sat in second place within the team formation behind Kerrie. We set off at a fair pace. Kitkat gave me an awful jump over the first and second so I was grateful for the long climb up a hill to the third to find a rhythm and ride up alongside Kerrie.

Fences four and five would have been a question if you were on a nappy horse — fortunately none of us were. There was then a quick switch back over a style and follwed by a jump into the lorry park field back over a tiger trap. We had to go a bit wider on this turn than you would have done if you had brakes and we were conscious that Amelia in third was without studs, but it was uneventful and we were steaming towards number six down a hill.

This is where I lost a bit of time setting up as Kitkat does like to run with his nose on the floor (I’m sure in racing it’s a sign of a genuine horse!). But hurtling down a hill to a trappy rail isn’t ideal so I did take a bit of a pull. By the time we got to the sunken road at ten I was back on Kerrie’s heels and heading towards the water. A small step down and out of the water and a shout for Kerrie to make sure we all were through. I think I responded but by this point I was holding my breath and bracing against my double bridged reins trying to keep Kitkat’s head at a more desirable level.

We galloped onto the next which was a rail to a sharp right-hand turn to another rail. We hadn’t walked it but hunted through it and took a direct line. In previous seasons we would have taken a circle so we are getting there with more competitive riding, but I was so overwhelmed that we had made that line that I couldn’t make the turn for the pen so Amelia came up alongside me and took second spot. A big shout of “CLEAR!” came from me as we jumped in and off we went again towards a reasonable open ditch.

No problems there and then on to couple of small hedges and rails and a final sunken road before the last. We were close together coming to the last and we kicked on for the finish line in the knowledge that although it was an optimum time class it would be a fast time if last year’s results were anything to go by.

As we crossed the line I heard the commentator say we’d had a good round and it had felt good. It was good fun, the horses ran well and I know where I could have taken better lines to keep up with the lead horse better.

The times went up and it was fantastic to see that all the teams finished within seconds of each other, a result the handicapper would have been happy with! We came eighth, with only 16 seconds separating us and the winner. I know exactly where I could have made up those seconds so I’m really looking forward to our next run.

The journey home took slightly longer than it did on the way there. Our lorry suffered a blow out on the M1 which wasn’t a fun experience. But super volunteer cameraman/groom/driver/entertainment that is Rachel, handled it really well and thanks to super service from the roadside recovery people we were back on the road within the hour.

Next on the agenda is the Pytchley team chase next weekend, bring on the hedges!