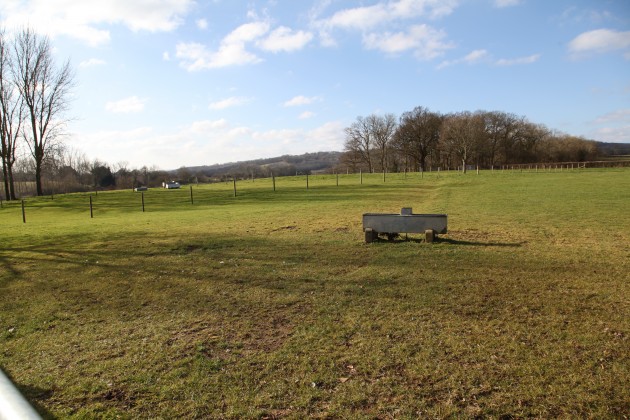 Does anyone remember the maths logic problem about the wolf, the goat and the cabbage? A man has to get them all safely across a river, in a boat that only holds him and one of the three at a time. He can’t leave the wolf with the goat, because wolves eat goats, and he can’t leave the goat with the cabbage, because goats eat cabbages.*

Recently I have been feeling a bit like the beleaguered wolf-goat-cabbage transporter as the new horse seems to have developed a weird form of obsessive compulsive disorder. He is only happy if things are done in a very particular way. He even has a mild opinion on the order we pick out his feet. But it is the turning out and bringing in process that is causing the biggest headache.

There are three horses/ponies to take out and bring in; my lovely old mare Molly, my good natured but easily influenced New Forest and the new boy. To turn them out, I walk up the track to the field and open the gate, which is on a steep slope and difficult to open if you are holding two or more horses. I then go back down and collect the two geldings first. When I get them up to the field, I have to undo the new boy’s headcollar first or he gets upset. I then go back to the stables and lead up my quietly cooperative mare. I have to do it this way round as the mare is the only one who doesn’t get upset if left on her own.

To bring them in, I catch my mare first as she is always as good as gold and either walks down to meet me or waits peacefully until I get to her. As I lead her down the field, I can be fairly confident that the other two, appalled at the prospect of being left out without her, will eventually notice she is being taken away and race down after us, and I can be equally confident that my mare won’t mind them thundering about. They then position themselves a few yards from the gate, while I take her through, close the gate behind me and put her in her stable. I can normally then go back up, collect the boys and make my way down to the stables, with a final trip back up to shut the gate. Wolf, cabbage and goat are then secure for the night and nobody has eaten anybody else.

Woe betide me if I vary this routine. The other day, when I went to catch them, my mare was right at the top of a steep slope, while the others were grazing at the bottom of it. Not feeling particularly sprightly that day, I thought I would save my legs and catch the boys first. Easily influenced ‘forester’ is a follower not a leader and prefers to be caught last, whereas new boy was happy to let me put the headcollar on. I then started to lead him back to the gate, whereupon my mare, indignant that the normal order had been overturned, came trotting down to me, fell into step alongside us then, as if to make her feelings plain, shot off again up the hill, making new boy leap about in a fairly alarming way.

Rather than get flattened, I unclipped the leadrope and let him go. The easily influenced forester was immediately swept up in the excitement. There then followed a massive hooley, with the three of them roaring round and round me in circles, snorting with their tails in the air. It felt like a scene from an old Western with me as a cowboy surrounded by a band of whooping Indians, desperately trying to work out how to avoid coming to a sticky end.

Eventually they all calmed down and were even a bit sheepish as I reverted to my usual plan A to bring them in. It’s early days for them all and I am sure they will settle down. It was just a timely reminder that even the most placid and good natured horses can have their moments and that it is so important to handle them in the safest, calmest way possible. I am very conscious that most of the time, I am here on my own and in these hills, nobody hears you scream! So in future I will be sticking to the plan.