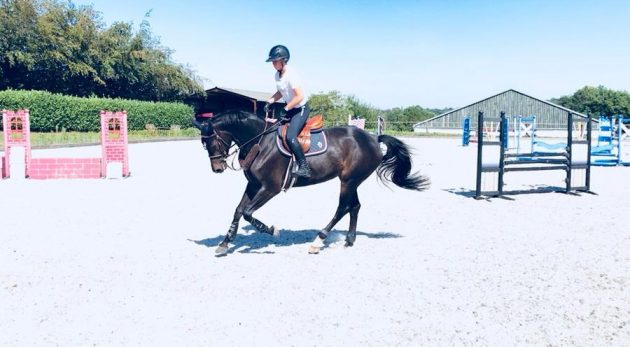 This is my first H&H Vlog, in fact it’s my first ever vlog of any kind! So I guess a very good place to start is with who I am. I’m Kirstie Leightley, I am a showjumper and I live and breathe my job.

I’m lucky enough to be the stable jockey at Guy Williams’ yard out here in France, so I really do get opportunities to ride some of the most amazing horses, which I absolutely love. I have been here for three years and before that, was based with Portuguese rider Joao Charlesworth in the UK.

I don’t come from a particularly horsey family but I do come from a very supportive one. Growing up, my parents have always been there to support me with my riding, despite wanting me to follow the traditional route of A levels followed by university, I made the decision having finished my A levels to pursue a full-time career in showjumping.

Out here we are more often than not travelling to or from a show around Europe and get the opportunity to compete at some great venues. Last week we were at St Lo CSI2*, and next up is Ruoen CSI4* Deauville.

We’ve had a great year with the team and my highlight so far was probably taking the win with Thais (more on her later) in the 1.40m Derby in the Le Touquet three-star Derby in May and finishing in the top 10. Oh, and we had a great time jumping in the Speed Derby at Hickstead too!

However recently I’ve had a very rare week at home, so I’ve taken this opportunity to give you a quick look around the yard and show you what the team and I get up to on a daily basis.

As you can tell from the video, the majority of what I do is ride. First up is Thais D’la Verrerie (Tilly), seen jumping the grand prix, who is strutting herself in the arena at St Lo. I absolutely adore this mare. Guy found her at a French stud a few years back. She is a real blood type and before she came to us no-one could really get on with her. When she arrived off the truck she was only tiny and rode like a pony — it was love at first sight! We took her straight to Hickstead popping round the novice classes and she then qualified for the Horse of the Year Show on the final day! We then stepped up from there jumping world ranking classes by the end of the year, and the following season jumped in some international four-star classes and the speed derby. Guy has nearly sold her on a number of occasions but I’ve always managed to persuade him otherwise, and as you can imagine, I put up a hell of a fight and wouldn’t let him — we now share the ride. Although she is sharp, she has such a super big heart and has done so much for me as a rider.

The other horses in the video are five-year-old Bella (who is one of my favourites), the grey is creatively named Blue and finally we have Haras de Lillebecs Vindaloo do Vercol, who you can see me schooling at home.

I literally love what I do and can’t imagine doing anything else but horses. I am so grateful to Guy and the team for helping me to realise my dreams. I am really looking forward to giving all the H&H readers a bit of an insight into showjumping life French side and sharing the highs and lows of competition as well, plus how we do things at home.