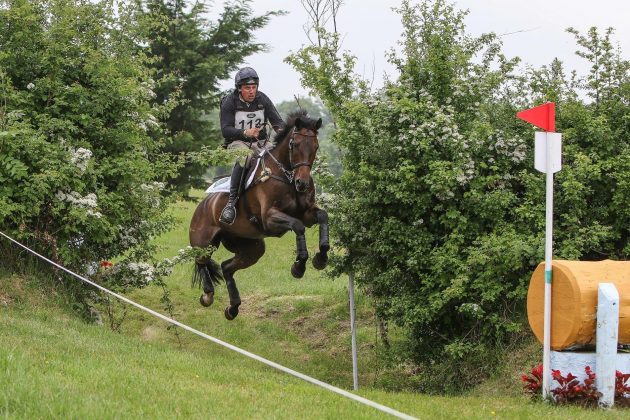 Who remembers saying “I hope we have some sort of summer this year, because winter’s lasting forever”? Hands up Britain! Well someone up there certainly took note, or to put it bluntly, is taking the p**s. We are now nearly a month into our British heatwave, and true to form we’re now all complaining about the heat.

Eventing in these conditions though is rather taxing on the horses and ground conditions are not always desirable.

After a short couple of weeks break with the horses, we were back on the grind at Aske Horse Trials with a lorry load of five. Being honest, I was expecting shin splints when I jumped out the lorry and I told the girls not to get the numbers until I’d walked the course and made an informed decision about whether to run or not. But I have to say an enormous amount of credit must go to the BEDE team. Stuart Buntine had done a tremendous job ensuring riders had the best possible ground in very difficult conditions for organisers. I was seriously impressed and will certainly be supporting the event in the future.

Not only was it a great event, it was a successful day all-round. Five horses competed and all five jumped double clears, giving them a super strike rate.

The Corn Crake (Herbie) was a winner in the open novice section (see video top), which was his first run since Tattersalls, so it was great to feel him in such good form. He was followed closely behind by Franzipan (Fran) in second, who was having her first run cross-country of the season so far and I couldn’t have been more pleased with her. OBOS Colombus (Obie), Wanskjaers Carlsson (Carl) and The Artist Almost Famous (Artie) all had nice steady rounds in the open intermediate, which hopefully should have set them up for Aston advanced in a couple of week’s time. We did have a slightly entertaining moment with Carl in the showjumping when the stewards tried to pronounce his name on the tannoy.

“Here’s Matthew Wright on Wan…….k….k….k…..zzzzz Carlsson.” I finished my round and then they shouted out to me “How do you say his name Matthew?” When I shouted back “W**krs Carlsson!” there was a large amount of laughter, followed by “that’s what we nearly said”.

It’s important in this heat to keep the horses hydrated and to have plenty of water on hand ready for when they come back from each discipline, especially the cross-country. Just throw as much water over them as you can followed by a good sweat scrape and keep repeating until the temperature is down. If you can find a shady spot too this helps and try and get them to have a drink.

Niamh and William venture out with Smudge

When they get home, be sure to give them plenty of electrolytes, the TRM Isopro or Superlytes are brilliant. It’s also important to stay hydrated yourself as a rider, groom, official or spectator, so be sure to take plenty of bottles of water.

As a rider you’ll find nothing quite quenches your thirst though like a nice cold beer or G&T at the end of the day. This is scientifically proven I’ve decided and is the perfect solution when back home.

Travelling horses in this heat is hard going too, especially when you don’t want to travel them in a rug, but want to keep them clean. The Shires Mesh Cooler is a good alternative solution in this situation. It keeps the horses cool and doesn’t make them sweat, but keeps covered all the right places.

The following week at Buckminster Park it was equally as hot, and I was supposed to have seven horses running over the two days of competition.

It was time for the young guns to make an appearance again on the Saturday and Class Booze Cruise (Boozy), Roko Rock (Boots) and Cooley Outlaw (Ainsley) all put in excellent performances. Boozy managed another second place rosette and has now been placed in all four of his starts. Boots showed much improvement on the flat and a grown up performance all-round taking fifth place for owners Amanda and Craig Morris, as did Ainsley for his owners Peter and Bernadette Harrison.

We didn’t run any of the novices the next day, who are all entered at Aston. The ground was still a little on the firm side, so we thought best to save their legs for the following weekend. This proved to be a wise choice on all counts as my daughter Niamh ended up at Bassetlaw hospital following a virus she’d had. She broke out in a rash with a fever so it was better to be safe than sorry and make sure it was nothing serious. I’m happy to report that she is now back to terrorising her brother and sister and eating us all out of house and home as per usual.

Matthew reports back from Bramham and shares an announcement

After the huge relief of Niamh being OK, when we got home it was reported that the lorry had decided she too needed to see a doctor down the yard. Due to the nature of that being only mud flaps that needed repairing, it was time for a bit of a DIY SOS mechanic job!

Carrying out some lorry DIY

Aston’s advanced and intermediate classes are the next stop now on the agenda for the majority of the horses, along with the gallops, which we are very much looking forward to. We also will have another exciting announcement to make in the next blog, so I’ll keep you all posted.