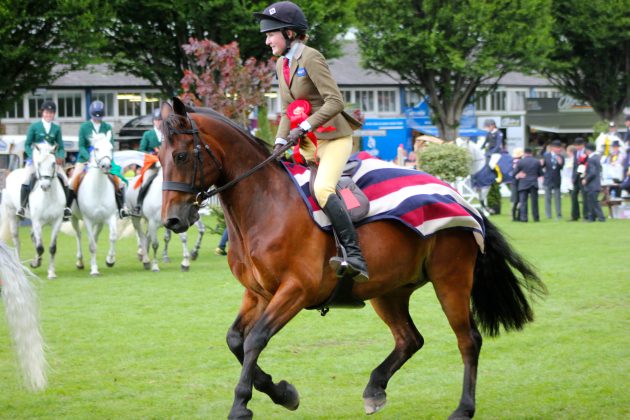 The Horse of the Year Show (HOYS), as ever, was completely amazing. I cannot even believe that I am fortunate enough to be able to write this but, for the third year in a row, Cash and I were victorious in the 153cm working hunter pony (WHP), our fifth win at HOYS together in total. For him to have won the last four classes there, plus a championship, and to also be the reigning Royal International Horse Show (RIHS) champion with my sister Susie… what can I say about him?

Cash winning his fifth HOYS class with me last week

There were so many who also finished their WHP days this year at HOYS. The thing about it is, although you spend only minutes actually competing in the ring, those few minutes are the culmination of a whole pony career. Not only does HOYS nicely round off the year, bringing to a head a year of work and progression, but that final performance is the result of years of hard work and practice. The result of a childhood spent being told to put your heels down, use your corners, stand at the pony’s shoulder as you trot it up. The result of bad days and good days, learning to tackle your nerves, be a good sport, always thanking your pony. And, perhaps most importantly, the result of selfless parents who slog for hours driving round the country, trying to find the perfect pony, wanting you to have your big day more than anything.

On my final lap of honour with Cash

I am unbelievably lucky to have been the recipient of all of the above, which has set me up so perfectly for success, and all culminated as hoped on my big last day. There were a lot of times where I almost hated the riding (for anyone who remembers, that Sky programme that featured my family at the Summer Champs, is still the worst thing that’s ever happened to me). But it has also given me the happiest memories and made my childhood so special and fulfilled.

Obviously the past five years with Cash have been the highlight of it all, but that is so instantly disloyal to my first pony, the irreplaceable Bradmore Raindance, who used to tiptoe round with me, effectively holding my hand. With my gorgeous 13 hander, Valentine Hazel, with whom I was shortlisted for the England team, and then my lovely 14 hander, Champfleurie Cream Cracker. They all gave me a ‘big day’ of their own.

With my 13 hander, Valentine Hazel

I am actually now in tears as I’m writing and reminiscing. My life would have been so empty without the ponies in it and I want to thank everybody — there are so, so many of you — who has made the past 12 years the experience of a lifetime. When I really think back, I have experienced and felt so much that I simply wouldn’t have if I hadn’t been competing at a high level. In its own funny way it puts you through so much that I really now feel equipped and ready to deal with anything that comes my way.

With my 14 hander, Champfleurie Cream Cracker

There’s so much I want to say about the riding but I can’t quite muster the words to really do it justice, so I suppose I will end here. Thank you so much to the BSPS for everything, to all the people who have helped in whatever way over the years, to everyone who has read my blogs, to all the beautiful ponies who have looked after me, to the competitors who have inspired me, to the friends of all ages I have made, to my father for bravely tolerating it, to my brother for bearing it and to my sister who is always there for me and will now take over Cash (and this blog) properly. Most of all, thank you with all my heart to my mother, who has worked tirelessly and lovingly for me and is my self proclaimed number one fan.

Walking the course with my mother while in Tiny Tots