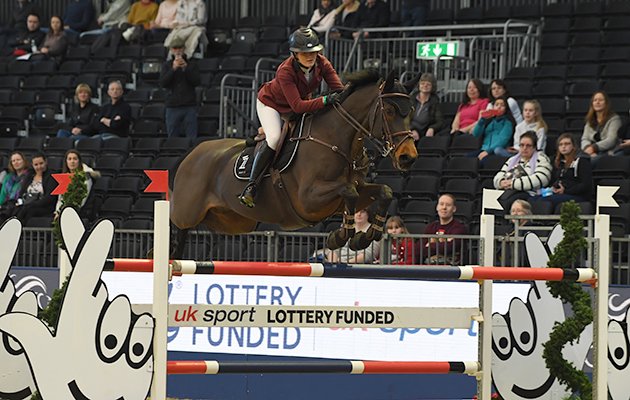 In my last blog I left you while I was deep in preparation for Olympia Horse Show, a show that I have always wanted to take a horse to, and with the Z7 horses with me I was getting the chance.

In the week running up to Olympia, Cash Up was feeling great and training was going to plan. Shane Breen, my trainer, and I took the small journey over to Scott Brash’s yard for a last training session away from home and I was really pleased with how Cash was feeling. We just jumped a few times round a course with some more technical lines and dog legs to get our eye in without any pressure.

Saturday came, and in true horsey martyr style, we were up at 3am, ready to leave the yard at 4am. You’d think by now I would be a morning person, but I’m not sure these sleeping hours are something anybody gets used to! I travelled in the lorry with Cash Up to make sure he was happy and settled (which he always is — I think he knew where we were headed!).

Cash Up at Olympia

When we arrived, we headed into the stables to settle my boy in and then I was straight back out to walk the course and what a course it was! It was clear from the tight, technical track built by Bob Ellis that we were going to have to move on if we were to be in with a chance of going clear inside the time.

We were third to go so I only had time to hear about the course from others watching before we went in, rather than having the time to watch for myself. The warm-up arena at Olympia is small, but this posed no problem for us as I could feel Cash Up was ready to go, even if we were both a little nervous about taking on this famous arena.

As with every show, Shane watched the riders before me and came back to give me his words of wisdom before I went in. Both riders before me had time faults so we discussed that I didn’t have any time to waste and would have to ride in a forward rhythm.

Cash Up at Olympia

Going into the arena it was amazing how small it felt when it seems so vast as a spectator. We started off well clearing the first two fences in in a good rhythm. As we came round the corner to fence three away from home I slightly pushed on, and annoyingly got too deep to the second part which meant that we had it down. I knew that four faults inside the time could still be enough for me to progress, so I couldn’t take my foot off the gas. Cash Up is an all or nothing horse — if he can’t show off with a snazzy clear round, one pole down can sometimes mean a repeat later on, which unfortunately happened through the last related distance, when we just touched a back rail by going on a slightly open stride.

Meet H&H's latest blogger, who has one of the most exciting weeks of her life ahead

Although having eight faults was disappointing, the experience we gained will put us in good stead for future competitions. Shortly after my round the time was extended as it was felt it had been a little too tight. I’ve been asked by a lot of people if I think this would have made a difference for us. Who’s to say? I don’t believe in dwelling. Every round is a learning curve and you have to look forward to your next competition. Onwards, upwards, and off to Dubai!
Georgia